Granit Rushiti in I Am Zlatan

It’s the difficulties Zlatan Ibrahimovic has encountered, rather than his successes, which are explored in the film based upon the best-selling autobiography by the Swiss football champion of Slavic origin (I Am Zlatan Ibrahimovic, published by Rizzoli) which was presented in a world premiere at the 16th Rome Film Fest. I Am Zlatan [+see also:
trailer
film profile], directed by Sweden’s Jens Sjogren, is a coming-of-age tale which mostly zooms in on the obstacles which have blocked the road towards glory walked along by this global football star (who’s sported the strips of major teams such as Juventus, Inter, Barcelona, Milan, Paris Saint-Germain, Manchester United, and is currently a striker for Milan and for Sweden’s national team). Following this man known for his goals, but also his kindness, exuberance and nerve, the movie covers his childhood as the son of Slavic immigrants in Malmo’s working-class suburbs, all the way up to his contract with Juventus, which marked the true starting point of his dazzling career.

The film begins with a partial failure. Ibra is playing in the Netherlands for Ajax. He’s not scoring many goals and he’s called a “lazy immigrant”. His Italian agent forces him to sell his Porsche and to focus on his training, because what he’s really angling for for him is the prestigious Turin-based team Juventus. Thus begins a lengthy flashback which starts with the footballer’s childhood where he makes his first moves on football pitches and few people actually believe in him (Dominic Bajraktari Andersson plays him as a child), and which goes on to explore his teenage years where Ibra plays for his city’s youth team (adopting the features of Granit Rushiti), before eventually linking up with the film’s present-day (where he’s still played by Rushiti, but adorned with the player’s unmistakeably long locks), where he’s getting ready to meet the then Juve manager Luciano Moggi at just twenty years of age.

However, instead of homing in on the training sessions, the director follows the future champion at school, in his neighbourhood (Rosengrad, on the outskirts of Malmo), in his two homes (those of his mother and father, who are separated), with his siblings, with friends, ambling between ever-empty fridges, amidst a lack of affection, excesses, attacks, petty theft, echoes of the Balkans War and with Muhammad Ali as his source of inspiration. Zlatan means gold, his father points out to his support teacher, as the latter suggests sending his son to a school for difficult children. But on the football field this seemingly misunderstood “golden boy” plays only for himself; he doesn’t pass the ball and his teammates want him thrown off the team (going so far as to sign a petition against him). So his coach keeps him on the bench until he learns some respect. His peers pass him by, securing promotions. But this son of immigrants from the poor suburbs must work twice as hard in order to succeed.

Ultimately, it’s this relationship with his father - a key character in his life - which serves to shed light on several facets of the protagonist’s personality, driving forwards a story which proves highly effective, overall, in depicting the environment in which Zlatan was raised, but which moves a little too slowly at the mid-way point. “You need to use your critics as your driving force”, insists his father, an interesting character with good sides and bad, a balance perfectly reflected in his son, skilfully played by newcomer Rushiti, who is himself a promising footballer (currently out of action as a result of injury) and who might also boast a great future as an actor.

Produced by Stockholm’s B Reel Films, I Am Zlatan will be released in Italian cinemas (ahead of any other country) on 11 November, distributed by Lucky Red and Universal Pictures. International sales are in the hands of TrustNordisk.

more about: I Am Zlatan

Triangle of Sadness wins big at the Swedish Guldbagge Awards

Ruben Östlund’s 2022 Palme d’Or winner has scored a landslide victory at the Swedish national film awards; other laureates include Boy from Heaven and Comedy Queen

I Am Zlatan kicks off production this week

Directed by Jens Sjögren, the much-anticipated biopic about Swedish football star Zlatan Ibrahimović starts shooting in his hometown of Malmö 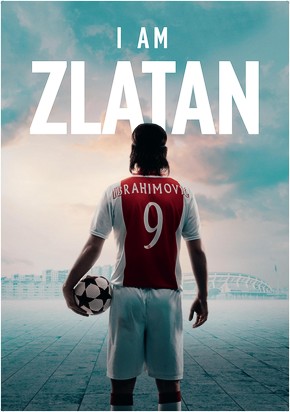