05/11/2021 - Benito Zambrano painstakingly follows the recipe for adapting Cristina Campos’ novel of the same name for the big screen, avoiding choking while also stirring in more than meets the eye

For those unfamiliar with the original book, a title like this could, at first glance, seem a little dubious. Will Lemon and Poppy Seed Cake [+see also:
trailer
interview: Benito Zambrano
film profile] be another sickly sweet film that uses cuisine as a pretext for cutesy romantic relationships? Or a vehemently unwanted film version of Master Chef or another similarly insufferable TV programme about chefs going head to head over the stove? Or even a kitschy disaster that’s impossible to digest? While at some points the new film by Benito Zambrano – which has been premiered as a special screening at the 66th Seminci – Valladolid International Film Festival – comes close to crossing these dangerous boundaries, it has to be said that the Andalusian filmmaker avoids succumbing to all the schmaltz and treacle, emerging unscathed from the tricky task of turning the adaptation of Cristina Campos’ successful book of the same name into a moving, beautiful feature, which is proud of its essence as a melodrama with a classical flavour to it.

Zambrano, who has proven that he has a wealth of knowledge of female psychology and sensibility ever since his feature debut (Solas), delves into a plot centring on women in order to talk about matters such as sisterhood, empathy, open wounds, bravery and mutual understanding. The cast is toplined by Elia Galera (in the best role of her career) and Eva Martín, who breathe life into two estranged sisters that reunite when they inherit a bakery in the village of Valldemossa, on the stunning island of Majorca.

When the director of The Sleeping Voice [+see also:
film review
trailer
film profile] trains his camera on that property and the surrounding landscape, and the screen becomes something akin to a picture postcard or an article from a pretty décor magazine, it slightly dilutes the personal drama and the mystery enveloping these two mature women who are forced to courageously face up to their destiny – and who do, in fact, succeed. How? By supporting one another and, above all, by reinventing themselves: this is where Lemon and Poppy Seed Cake takes on its tastiest flavour, after kneading its dough of empowerment and a desire to move forward together, with fondness and honesty.

Because, as Zambrano himself admitted to Cineuropa in a recent interview (read it here), he made this feature in order to move the audience, and boy does he pull it off, with a slow-burning but steady mise-en-scène and by mixing in sumptuous ingredients, such as the championing of individual freedom, unity in the face of any challenge (be it domestic or related to life in general) and the need to listen to one’s heart, with everything that entails… Having said that, one or more viewers averse to raw emotion may feel compelled to hastily pigeonhole this story about people (of any sex), willing to do whatever it takes to improve their lives, as a soap opera.

Lemon and Poppy Seed Cake is a co-production between Spain and Luxembourg, staged by Filmax and Deal Productions, in association with La Perifèrica Produccions. It is sold abroad by Filmax, which will also release it in Spanish theatres on 12 November.

“It’s therapeutic to cry in the cinema”

Benito Zambrano painstakingly follows the recipe for adapting Cristina Campos’ novel of the same name for the big screen, avoiding choking while also stirring in more than meets the eye

Lemon and Poppy Seed Cake by Benito Zambrano will be the opening film of the event, where Wim Wenders will receive the Evolution Honorary Award

The Seville-born helmer is turning the best-selling Cristina Campos book into a film, which he is currently shooting on the Balearic and Canary Islands 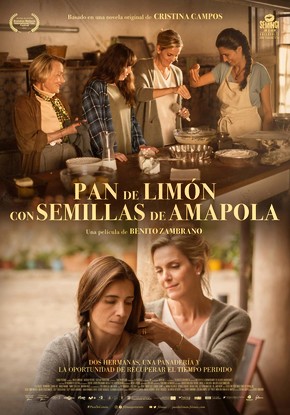