15/11/2021 - Dimitris Kanellopoulos’ debut feature suffers from an uneven pace, but the centrality of the protagonists’ role reversal is appealing enough

Dimitris Lalos in Pack of Sheep

One of the titles world-premiered in the international competition of this year’s Thessaloniki Film Festival was Dimitris Kanellopoulos’ drama Pack of Sheep. This feature, penned by the Arcadia-born sound engineer-turned-director, is based on a very simple premise. Thanasis (played by Dimitris Lalos) is unable to pay off his €40,000 debt to an old loan shark called Stelios (Giorgos Valais). The man finds out that Apostolis (Aris Servelatis), the owner of a convenience store and the husband of his lover Georgia (Vivi Petsi), cannot pay Stelios either. Thus, he asks him to work together with a bunch of other debtors to put pressure on their Shylock in order to strike a better deal.

For most of the film, the balance of power sees prey and predators exchange their roles. The group of debtors gradually gain confidence and push their boundaries, unwilling to lose their grip on two young gangsters – Paradisis (Lefteris Polychronis) and Sotiris (Giannis Vasilottos) – who recently came to town to claim Stelios’ money. The role reversal is perhaps the most compelling aspect of the whole effort. It becomes a central narrative element in particular during the film’s second half, as soon as Thanasis and his companions in misfortune attempt to put their plans into action after meeting at a bar. From that moment on, the story proceeds at a faster pace and acquires depth, after a hesitant set-up which does not add anything indispensable to the characters’ motives. We find out that Thanasis, for example, has an estranged relationship with his young son (Minas Matheas) and that his wife (Dimitra Kouza) clearly suspects him of cheating on her. This backstory is not merged organically with the rest of the plot, and there is little surprise in finding out that someone so desperate is leading a troubled life, something that does not differentiate him from any of his other miserable cohorts.

The ending is twofold, as one closing scene centres on Thanasis and the other on Apostolis. Even though some viewers may appreciate this duality, both closing scenes end up weakening each other and deliver the same – and not particularly novel – message on toxic masculinity and the strength of the pack, which ultimately emerge as the real core themes of the film. Despite these imperfections and its uneven pace, Kanellopoulous’ movie does show off some good intuition in terms of staging, a decent ensemble of actors and a few charming scenes, such as the one with the encirclement in the forest or the opening dialogue between the two gangsters commenting on the sudden fall of an orange from a tree. Visually, the tense atmosphere is rendered well, thanks to DoP Stelios Pissas’ choice to reflect the characters’ emotional turmoil through an acid colour palette dominated by green, grey and yellow shades, along with the presence of a foreboding, gloomy sky in the backdrop.

more about: Pack of Sheep

Dimitris Kanellopoulos’ debut feature suffers from an uneven pace, but the centrality of the protagonists’ role reversal is appealing enough

The Greek Film Centre announces its July slate of funding

Alexis Alexiou, Margarita Manda and Dušan Milić are among the recipients of the latest round of funding, which totals close to €1 million 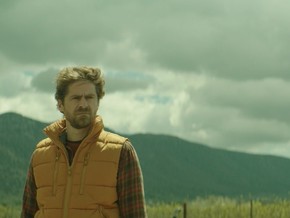