22/11/2021 - Adilkhan Yerzhanov’s latest feature once again boasts a cast split between white clowns and augustes, but the result is far less effective than that achieved in Yellow Cat

We’ve heard the term ‘herd immunity’ a lot over the past two years, and for very good reason. Adilkhan Yerzhanov’s new feature, which world-premiered in the main competitive strand of this year’s Tallinn Black Nights Film Festival, attempts to ride the crest of this wave with a story set in Karatas, a corrupted (and very remote) rural village which is forced to deal with the coronavirus emergency and restrict its inhabitants’ freedom of movement.

The story of Herd Immunity focuses on Selkeu Uashev, a local police officer dressed in an improbable fuchsia shirt (Daniyar Alshinov) who, together with his right-hand man Zhamzhysh (Nurbek Mukushev), ignores most of the community’s criminal offences and negotiate bribes, often with very poor results. In his defence, Selkeu claims that most of the locals need to break the law with small scams and by selling vodka in order to make ends meet. At some point, the village enters lockdown and Selkeu’s ex-wife Turiya (Assel Sadvakassova) comes to visit the two agents. She joins forces with them in order to catch a local man called Zambeke (Bauyrzhan Kaptagay) who refuses to obey the authorities. Apparently, she’s part of a commission sent by a nearby big town, which consists of a bunch of clumsy policemen and Turiya’s new husband - a higher-rank official called Gurbeken (Yerzhan Zhamankulov) who could refer Selkeu for a better job in town, if things go smoothly.

As in his 2020 Orizzonti entry Yellow Cat [+see also:
film review
trailer
film profile], Yerzhanov imbues his film with an overly absurd atmosphere and many whimsical characters. The cast seems to be split into white clowns and augustes, with the former embodying authority and some sort of “common sense” (Gubarken and Turiya, for example), and the latter challenging the former and choosing to do things their own way (Selkeu and Zhamzhysh in particular).

Moreover, Selkeu dreams of putting together a dance troupe called “The Rascals” in Karatas, but he’s forced to face up to the demands of a local mobster (and aspiring director) called Bula, portrayed here by real-life filmmaker Bolat Kalymbetov. Viewers will discover many creative choices which enhance the more surreal qualities of the story, but most of these result in a humour which struggles to bring about laughter. In Yellow Cat, the characters’ tenderness and naivety made up for the movie’s imperfections and fragmentary storytelling, and somehow fitted the overall tone. Here, we see a similar type of naivety, but the characters are immersed in a more realistic social context with a concrete emergency unfolding the background, and the writing isn’t sufficiently balanced to encourage us to empathise or have fun with this bunch of reckless individuals.

It’s also true that the tragicomic nature of the emergency itself could have given rise to more playful solutions. Instead, these are limited to the weak plot device of lockdown, and people greeting each other with fist bumps and saying “coronavirus”, while the vast majority of the characters on screen never wear a mask or mention anything about the wider world being struck by the emergency. In this sense, Herd Immunity failed where Radu Jude’s Bad Luck Banging or Loony Porn [+see also:
film review
trailer
interview: Radu Jude
film profile] succeeded earlier this year. The cast and their grotesqueness no doubt had potential, but this is rapidly lost on account of some highly forgettable subplots (such as the one involving the 17-year-old orphan) and unclear links between one scene and another.

In one of the final frames, Gurbeken tells Selkeu that rules are needed in order to dance, and he’s right: a few more rules in his writing and staging approach might have helped Yerzhanov deliver a more compelling tale and a better artistic exploration of his clownesque vision of the world.

Maryna Er Gorbach's Ukrainian Oscars submission has won Best Film and Best Director; other awards went to A Room of My Own, The Four Walls and Herd Immunity

Batumi stripped of state funding but pushes on with crowdfunding campaign

Adilkhan Yerzhanov’s latest feature once again boasts a cast split between white clowns and augustes, but the result is far less effective than that achieved in Yellow Cat 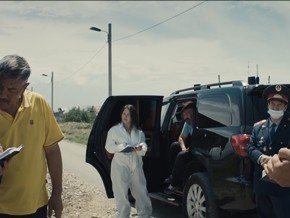 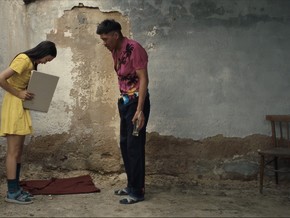 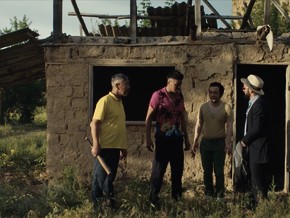 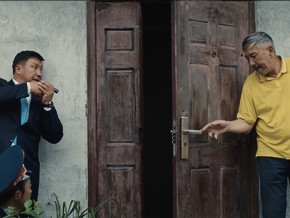