13/02/2022 - BERLINALE 2022: The collective work of ten anonymous filmmakers from Myanmar showcases the year of military dictatorship that the country has been under

For one whole year now, the people of Myanmar have been living under a brutal military dictatorship. Some viewers may recall the coup as it happened, but meanwhile, it has slipped out of the news headlines, and this is exactly the reason why the work of Dutch-based filmmaking couple Corinne van Egeraat and Petr Lom is important. They lived in Myanmar for four years, and last year, they were the creative producers on two short films, Sad Film and Letter to San Zaw Htway, billed as anonymous or collective works, which premiered at Venice and IDFA, respectively.

Now premiering in the Berlinale Panorama, Myanmar Diaries [+see also:
trailer
film profile] is a 70-minute picture made by ten anonymous Burmese filmmakers under the moniker The Myanmar Film Collective. Unlike the 2020 IDFA Best Editing Award winner Inside the Red Brick Wall, shot during the Hong Kong protests and depicting one event, Myanmar Diaries is a collage of short documentaries and fiction films giving an all-encompassing account of the coup and the resistance.

Opening with the surreal aerobics video of a girl who accidentally captured the beginning of the coup, which is well known on YouTube, the film, among its documentary segments, features footage of brutal repression. In a heartbreaking scene, we hear a child cry for her mum as a bunch of soldiers try to get into the house and take her away. In a thriller-like PoV video, a man is on his balcony as soldiers attempt to break in, telling them that he will come voluntarily. In one of the strongest pieces, a lady in her sixties literally speaks truth to power, to soldiers lined up in their vehicles, protesting about the cold-blooded murder of a girl. In a visually striking autobiographical essay, a young woman is lucky to have managed to reach Bangkok, but feels guilty about leaving her friends and family behind.

The fiction segments are sometimes poetic or allegorical, but are always painfully straightforward. A father still goes to work despite the strike, fearing for the future of his son, who is shunned by his friends because his dad is considered a traitor to the Civil Disobedience Movement, which leads the protests. In a horror short, a man is visited by a ghost who sits on his chest as he falls asleep while watching the TV. A man prays for his slain wife before he commits suicide. A girl tries to decide whether to tell her boyfriend that she is pregnant as he is preparing to run away to the jungle and join the growing resistance.

The jungle is where the film ends, with the words, “Can you hear us?” It signals hope but is also a cry for help. This is powerful stuff, not only politically, but artistically, too: despite the lo-fi aspect of all of the segments, they are connected in an admirably consistent way and have a well-built chronology and dynamics that keep the viewer not only engaged, but genuinely moved, at times also flabbergasted. The narrative simplicity of some of the fiction pieces only makes them more potent, and the documentary parts, most often reproductions of Facebook Live streams made in an attempt to get the story out there, possess a raw energy of despair, anger and protest.

If the news won't show Myanmar, cinema will, and it has the power to transcend numbers and pure story to create empathy and awaken humanness in audiences numbed by the mainstream and social media.

Myanmar Diaries is a co-production between the Netherlands' ZIN Documentary, Norway's Ten Thousand Images and The Myanmar Film Collective. Austria's Autlook Filmsales has the international rights.

The Movies that Matter Festival announces its Industry Days

The Dutch festival focusing on human rights will unspool its industry section in a hybrid format, featuring a series of talks, panels and master classes

BERLINALE 2022: In a female-dominated spread of awards, other winners included Claire Denis, Rabiye Kurnaz vs. George W. Bush and Mutzenbacher

BERLINALE 2022: The collective work of ten anonymous filmmakers from Myanmar showcases the year of military dictatorship that the country has been under 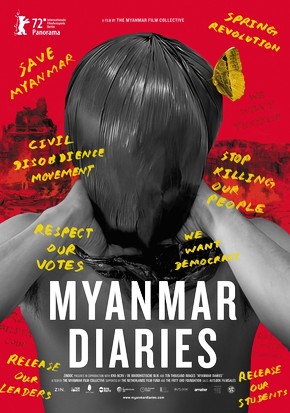 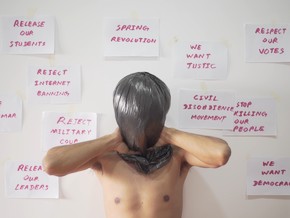