Catherine Clinch in The Quiet Girl

Based on the story Foster, penned by Claire Keegan, Irish writer-director Colm Bairéad’s film The Quiet Girl [+see also:
trailer
interview: Colm Bairéad
film profile] is one of the most surprising titles at this year’s Berlinale. Screened in the Generation Kplus strand, the picture is the first Irish-language feature ever selected by the prestigious German gathering. The story’s set-up is tremendously simple: Cáit (sweet, charming newcomer Catherine Clinch) is a quiet, young girl growing up in a family of four siblings, who has to endure the indifference and lack of affection of a cursing father (Michael Patric) and a problematic mother (Kate Nic Chonaonaigh). And to make matters worse, Cáit is repeatedly mistreated by her classmates at school. Riddled with insecurity and lacking the much-needed support of her family, the girl wets her mattress every morning.

At one point, her parents decide to send her to spend the summer at the farm of two relatives she has never even met, Eibhlín (Carrie Crowley) and Seán (Andrew Bennett). It is a groundbreaking experience for the little girl, who gradually gets to know the affable couple. She finally feels loved and gains confidence, and the deep bond between the three grows day by day. But there is a sad past that Eibhlín and Seán are hiding, which will provide an explanation for some aspects of the couple’s behaviour.

Bairéad crafts this tale with two simple tools: three excellent lead actors who play their parts with great honesty – especially Clinch, who, despite having few lines, always manages to be a powerful, intense presence – and the use of “naturalistic time”, as he gives them a chance to familiarise themselves with each other through everyday gestures and shared activities, such as combing hair, milking the calves, cleaning a stable and cutting onions. It’s rare to see this type of tempo staged successfully in a contemporary film. Besides, it’s the Ireland of the early 1980s, a place that was very different from the one we know today, heavily urbanised and living through its post-Celtic Tiger years. It’s the portrait of a country where, back then, a quiet existence in the countryside, a smart house surrounded by trees, a good cup of tea and the small pleasures of life were able to bring much more joy and serenity to people. And even though this may look like an idealised representation of that period, this tinge of nostalgia fits the story’s characters and atmospheres perfectly.

Visually, this feeling is well rendered through the cinematography by Kate McCullough (the TV series Normal People), who chooses to create a stark contrast between the brightness of Eibhlín and Seán’s countryside nest and the grim colour palette of Cáit’s actual, decrepit home. The touching ending may invite viewers to think through what parenthood means and how important love is for children if they want to build their own identity. The work of composer Stephen Rennicks (Good Luck to You, Leo Grande [+see also:
film review
film profile], Death of a Ladies Man [+see also:
film review
trailer
film profile]) is the icing on the cake, as he gifts the audience once again with a superb, highly emotional score.

more about: The Quiet Girl

“I decided the camera shouldn’t ever leave the protagonist”

BERLINALE 2022: From Ireland comes an intimate coming-of-age story set in the 1980s but with timeless relevance

The Irish producer, selected as one of this year’s Producers on the Move, shared some thoughts about her job and how the market has changed over the last two years

BERLINALE 2022: The documentary by Clare Weiskopf and Nicolas van Hemelryck triumphed in the Generation 14plus section, while Sanna Lenken’s film proved victorious in Generation Kplus 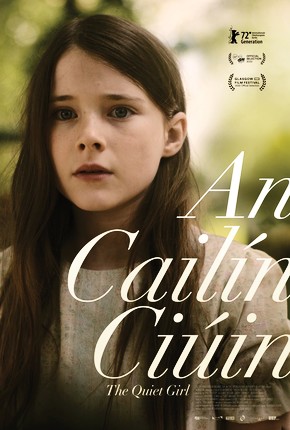