In part thanks to the rise of streaming services, it seems like every other day we can watch a new, in-depth documentary about the atrocities committed by pharmaceutical, oil, mining, internet and food companies. But Nestlé has been a known villain for a long time, at least since Erwin Wagenhofer's pioneering 2005 film We Feed the World [+see also:
trailer
film profile]. Now, Danish director Miki Mistrati's third documentary about the dark side of the chocolate industry, The Chocolate War, has world-premiered in CPH:DOX's F:ACT Award Competition.

US lawyer Terry Collingsworth has been fighting this war since 2006, when he discovered six cases of child slavery in Ivory Coast, where 40% of the world's chocolate comes from. Six boys from Mali testified on camera that they were abducted at the age of 12 and taken to plantations to work without pay. "That's the age when they are big enough to work but young enough to be afraid of adults," says the lawyer.

It took 11 years for the Federal Court of Appeals in California to accept to review the case that Collingsworth and his litigation partner Paul Hoffman submitted, arguing that the boys can sue Cargill and Nestlé in the USA. The former buys cocoa beans from plantations and sells them to the latter, and their army of super expensive lawyers were able to delay the case on various grounds - one of them being that the companies had no way of knowing children were exploited. But a couple of invoices a Malian human rights advocate finds prove otherwise, and Collingsworth travels to the West African country to meet the six plaintiffs who are now about 20 years old.

Together with two interns in Hoffman's firm, non-threatening young women who speak French and study law at Berkeley, Collingsworth then visits a Cargill cooperative in Ivory Coast, where they learn about lax controls and audits that the companies supposedly implement. The conclusion is that the "UTZ-certified" and "Fairtrade" labels we see on chocolate bars often mean nothing: for example, the International Cocoa Initiative which works to "eliminate child labour and forced labour" in Ivory Coast and Ghana is heavily funded by Nestlé and Cargill who sit on their board. Corporations in all fields regularly establish such bodies as alibis for their crimes.

In parallel, Hoffman is arguing the case at the Pasadena court against a Cargill lawyer who claims the evidence is impermissible because it comes from another country. But the judges are sensitive to the issue of child slavery and allow the case, meaning that Collingsworth and Hoffman can now sue the companies. Of course, the big-money lawyers will appeal to the US Supreme Court, populated by Trump appointees and primarily supportive of corporations.

Style-wise, The Chocolate War is a typical suspenseful investigative documentary, with dramatic music, fast cutting and plenty of contextual narrative titles which make the story crystal clear. It also manages to elicit emotions that go beyond righteous anger, particularly in a scene when Collingsworth and the two interns visit a random plantation, see the child workers for themselves and interview one of them.

The end of this story is nowhere in sight, and the film shows that it takes not only the effort of courts, lawyers and the media, but also requires consumers to act in order to hold corporations responsible. Compared to them, drug cartels seem like pickpockets, and this is why Mistrati has made three films about it.

The Chocolate War is a co-production between Denmark’s Made in Copenhagen and Norway’s UpNorth Film. DR Sales has the international rights.

more about: The Chocolate War 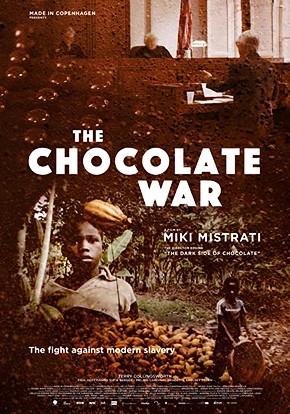