Review: We Won’t Kill Each Other with Guns

29/03/2022 - Director María Ripoll’s intention is to paint a portrait of a generation adrift, but it remains just that – a mere intention

One summer, a group of five friends return to the town where they grew up for a get-together. They haven’t seen each other for quite a while, and each of them has forged a life for themselves. They are all in their thirties and feel as though they’ve reached the age when the die has already been cast, attempting to navigate between unstable jobs and emotional ups and downs. They intend to celebrate the fact that they are together again, and that despite everything, they still have enough reasons to want to move on. This is the storyline of We Won’t Kill Each Other with Guns [+see also:
trailer
film profile], the new film by Catalonian director María Ripoll – an adaptation of Víctor Sánchez’s stage play Nosaltres no ens matarem amb pistoles – which was presented in the Official Section of the Málaga Film Festival.

On paper, the premise would appear interesting, as the starting point has great potential: a discussion of insecurity, uncertainty, frustration, disenchantment, a feeling of loss and emptiness, human relationships, the passing of time and the traces it leaves within us, and the exciting and heart-rending aspects of life. It switches from a personal perspective to a collective one, a portrait of a generation that ends up being applicable to us all. The problem with Ripoll’s movie lies in what she fashions out of this plot. The intention to reflect the conflicts that exist among a group of characters, as well as their past and their present, via a reunion is an idea that is simple and classical in equal measure, but that doesn’t make it any less appealing. There are moments in the movie that convey a certain emotion, which manage to reflect a truthfulness, attitudes, feelings and emotions that, in one way or another, we have all experienced at some point in our lives. That feeling of recognition may encourage us to carry on watching.

However, the big problem with the film is that none of this goes beyond mere intentions. There are moments, flashes of promise, but they don’t lead to anything more. It loses its way, getting bogged down in platitudes, clichés and naivety – even triviality. When we see stereotypes among characters, this is not always a flaw, as sometimes they work well and are representative of real life, but it’s not the case here: they remain simple and facile caricatures. In fact, they strike us as a lazy exercise in creation. There’s also a certain laziness in the way the conflicts are resolved, as if the director had wanted to set things straight without overcomplicating matters, like a quick and overly easy exercise in arithmetic, chucking in a bunch of ingredients that might work together in order to get the end result she wants, as easily as possible. Stories need time, a specific space and a particular tempo to be told at. Here, the majority of the conflicts among the characters are portrayed without us delving deeper into any of them. We only scratch the surface, remaining in hackneyed territory – they are so trivial that they are not believable. There’s also an eagerness to explain absolutely everything, to attain a level of complexity that the film simply doesn’t possess – with supposedly profound or wondrous reflections – and it ends up hindering the narration of any topics that could potentially be interesting. It’s not necessary to launch into a whole speech about resignation and the death of one’s hopes and dreams in order to broach the issue. Subtlety is a virtue in fiction, but of course, that entails more risk – you have to know what’s excessive and what’s not. In this case, there are just too many words and preachy messages. At the end of the day, the best moments in the film are the handful of entertaining ones that elicit a giggle or two.

We Won’t Kill Each Other with Guns is a co-production by Spain’s Turanga Films, À Punt Media, Un Capricho de Producciones and TV3, which will hit Spanish screens on 17 June, courtesy of Filmax.

more about: We Won't Kill Each Other with Guns

From 18-27 March, the gathering is salvaging the events that were cut short by the pandemic, and premiering the new films by Nely Reguera, Daniel Guzmán and Ibon Cormenzana, among others

Review: We Won’t Kill Each Other with Guns

Director María Ripoll’s intention is to paint a portrait of a generation adrift, but it remains just that – a mere intention 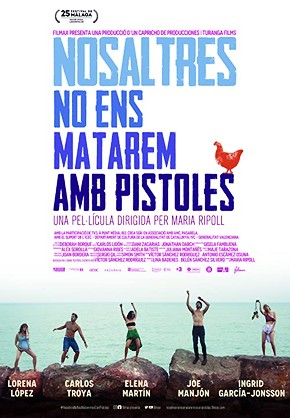