Review: A Taste of Whale

30/03/2022 - French journalist and filmmaker Vincent Kelner serves up a juicy, perfectly cooked dish that is bound to become one of 2022's environmental cinematic hits

Grim images of Faroese people standing in a shallow sea of blood as they slash pilot whales during the traditional killing known as the "Grind" have been a particularly painful sight for animal rights activists, but also for regular people. Arguably, it's one of the strongest visual incentives for vegetarianism, but it’s also a tradition that the islanders are passionate about. French journalist and filmmaker Vincent Kelner's second documentary, A Taste of Whale [+see also:
interview: Vincent Kelner
film profile], which has world-premiered in CPH:DOX's F:ACT Award Competition, tackles it in a meaty, thought-provoking and remarkably balanced way.

Kelner takes great care to present both sides of the argument before he actually shows us the Grind one hour into the film, but he already foreshadows it with the design of the opening credits. The first shot is a close-up of one of the principal protagonists, schoolteacher Jens, with drops of blood on his glasses. Then we see him cutting up whale meat in front of his house. “I feel much closer to nature than if I buy chicken in the supermarket,” he says, setting up the issue as a contrast between the industrial rearing of animals and hunting.

Lamya, the lead activist from the Sea Shepherd organisation, whose members were the heroes of the 2019 National Geographic documentary Sea of Shadows [+see also:
film review
trailer
film profile], on the connection between overfishing and organised crime, says that these are just two different ways of murdering animals. Sea Shepherd boats have arrived to spend the summer off the Faroe Islands and to try to stop the Grind, bringing along Pamela Anderson for a heated press conference.

Kelner patiently builds the story through interviews with the Faroese, where fisherman Tórik is especially outspoken, as well as with the activists, but it is local environmentalist Rúni who provides the most reasonable points. He makes it clear that this is essentially an emotional issue framed as an ethical one. For the Faroese, a tight-knit community known for its resistance to foreign influences, this is a tradition they defend all the more fiercely the more it is attacked, even if, like Jens, they agree it's brutal. For most other people, the image of whale-killing is too much to bear, but the teacher says that, basically, it's no different from slaughtering a pig. Tórik even calls it out as a "pathological empathy for whales", bringing to mind the 2010 Oscar-winning documentary The Cove, in which the whole nation of Japan was demonised for its whaling. And since the Faroese today do not lack food, Lamya rightly considers the killing unnecessary.

All of these conflicting opinions are positioned in the most sober way via Olivier Marzin’s dynamic editing, interspersed with epic, wide shots of the islands that possess an undeniable, rugged beauty. Along with his pointed understanding of their customs, this seems to nudge Kelner's viewpoint towards the Faroese stance, but whenever the viewer thinks they can detect a bias, the director tips the scales to the other side.

In the last half-hour, it appears that the solution to the issue could be found in scientific and medical elements. By then, Kelner has served up a perfectly cooked, juicy dish in which each of the ingredients, tastes and textures can be detected individually, and the consumer can decide what to make of it. However, the famous quote from Paul McCartney that opens the documentary, “If slaughterhouses had glass walls, everyone would be vegetarian,” makes the film's main point crystal clear, overriding the whole controversy of the Grind.

A Taste of Whale was produced by France's Warboys, and Germany's Films Boutique has the international rights.

more about: A Taste of Whale

Interview: Vincent Kelner • Director of A Taste of Whale

"In the Faroe Islands, they are close to nature and they don’t lie"

The 24th edition of Israel's biggest documentary festival will present a total of 122 films, including 26 world and three international premieres

Review: A Taste of Whale

French journalist and filmmaker Vincent Kelner serves up a juicy, perfectly cooked dish that is bound to become one of 2022's environmental cinematic hits 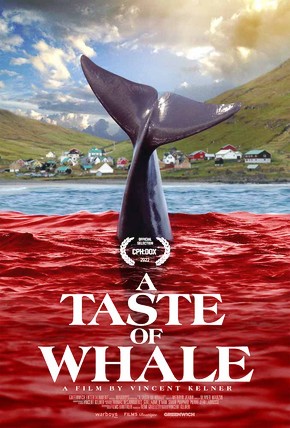