19/05/2022 - CANNES 2022: A young Tunisian man strives for a better life than selling contraband petroleum on the streets, in Lotfy Nathan’s debut feature

In Arabic, Harka is a noun meaning “movement” – more specifically, a group of volunteer soldiers who have banded together to fight. Egyptian-British filmmaker Lotfy Nathan’s debut feature, Harka [+see also:
trailer
film profile], premiering this week in Cannes’ Un Certain Regard, sees a solitary young Tunisian man floundering in his attempts to establish a secure life for himself, perhaps in need of this very sense of unity. Ali (rising French-Tunisian actor Adam Bessa) is a true outsider, or “underground man” – an alienated and desperate figure straight out of classic existentialist literature, whilst in the background of the story, protests evoking the successful Tunisian Revolution of 2011 are reaching boiling point. With the precedent of Mohamed Bouazizi in mind – whose martyrdom helped spark the revolution, and thus the wider Arab Spring – Harka takes a holistic view of this struggle, showing how Ali’s ordeal brings about wider good in his wake.

Harka is a robust and confident piece of filmmaking, often carrying a propulsive sense of momentum, and never settling for the gentle, observational social realism that can be the default mode for works like these. Yet it’s also somewhat skeletal and underdeveloped, content to show Ali on the runaround for cash, retribution or just his very survival, and neglecting further fine-grain detail – whether in his social and familial affairs, or the political background – that would give the film more depth. This is Nathan’s first fiction feature, following his Harmony Korine-esque dirt-bikers doc 12 O’Clock Boys and many stylish advertising spots, and it occasionally feels like a mere calling-card work – a film made to showcase visual chops and storytelling competence, with an eye on more ambitious, higher-budgeted projects to come.

Ali is a man with barrels’ worth of watered-down petroleum, but nowhere to go. It’s his sole source of (illegitimate) income, paid in weathered dinar bills that look like they’d decompose at the slightest touch, ready to be hidden in the dilapidated side wall of the building he squats in. He’s being pulled in opposing directions by his late father’s debts and their impact on his two sisters (Salima Maatoug and Ikbal Harbi), and the desire to get the hell out of Tunisia and into a more lucrative life in mainland Europe, represented by his drinking buddy one evening boasting of his “cash and bitches” in Berlin (a remark which Ali, getting the audience on side, meets with a knowing scowl). As the stakes rise, and his sisters face eviction from their home, the taciturn old man he sources the petroleum from asks, in a gravel-voiced, film-noir way, if he “drives”. And so Ali gets involved further down the smuggling supply chain and into more insecure, if not violent, territory, ferrying oil across the border from its originating source.

Ali isn’t an anti-hero – he never stoops to immoral acts, forcing the audience to root for him against their best impulses. He is really trying to do the “right” thing at every turn, and only at the very end does his growing frustration and immobility diminish his willpower. Apart from one key instance near the film’s close, he is utterly isolated from the other frustrated people all around him, not realising he shares their righteous struggle against inequality and state power in the country. And their two trajectories merge far too late, at Ali’s expense – yet his crusade is not for nothing.

"Luckily, I saw quite a lot of films that I'm not allowed to talk about!"

In the third episode of our new short video series from this year's Cannes Film Festival, Elena Lazic talks to journalist Kaleem Aftab

CANNES 2022: The film by Lise Akoka and Romane Guéret has come out on top, while other awards went to Joyland, Metronom, Corsage, Harka, Mediterranean Fever and Rodéo

CANNES 2022: A young Tunisian man strives for a better life than selling contraband petroleum on the streets, in Lotfy Nathan’s debut feature 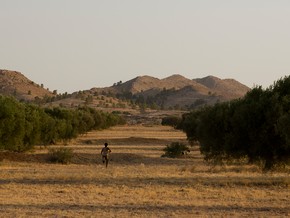