Playing in the Cannes Directors’ Fortnight, Saela Davis and Anna Rose Holmer’s God’s Creatures is a tale about a son making a surprise return home after a long absence in "Australia", looking at maternal love, believing victims, and collective masculine irresponsibility. It's a slow burner that starts roaring when the emphasis is placed on unravelling the state of mind and conflicting emotions of Aileen O'Hara (Emily Watson), who, at first, treats her son Brian (Paul Mescal) like the prodigal son upon his return. As the days pass in the Irish fishing community and an accusation of sexual assault is levelled against him, Aileen must grapple with the idea that her golden child may be as tarnished as the whispers claim him to be.

Watson is an actress who gave Cannes one of its best-ever female performances when, in 1996, she broke even the coldest of hearts with her mesmeric turn in Lars von Trier's Breaking the Waves. There are echoes of that performance in her Aileen, who wants to believe in the essential goodness of the troubled men surrounding her. At first, she's even prepared to give the police a less-than-convincing alibi for her son's whereabouts. She works at a fish factory that is the economic engine of the community.

Also working at the factory is the quiet Sarah (Aisling Franciosi). She is a victim not just of a sexual assault, but also of a society and a community that would rather protect its men than be open about the crimes committed. The pub, the other beating heart of the community, turns against her when Sarah makes an accusation of assault. After all, according to the flock of men, she brought it all on herself because she was not on high alert at all moments, even when with guys familiar to her.

Mescal is an actor who has very quickly established himself as the guy to call when you need a romantic lead with a dark, tragic side. His men are never brutes, just deeply troubled. His comportment and his slow, deliberate delivery always suggest that there is an emotional roller coaster going on inside of him.

Directors Saela Davis and Anna Rose Holmer’s debut film, The Fits [+see also:
trailer
film profile], was a festival hit. Like that movie, this one holds a microscope over a small and poor community where female allies can provide some sanctuary. The directors are adept at recreating the characters' interior lives using muted colours and grey skies. The close framing at moments also feels like it's slowly strangling the characters on screen.

Rightly, amid the #MeToo revelations, the focus was on those committing heinous abuses. This meant that questions surrounding those who in some way protected said abusers were overlooked somewhat. As the years have passed, questions about who an ally is have come to the fore, and this film really takes off when it gives Aileen the age-old conundrum of what she is willing to do to save her son. Does a mother's love override moral boundaries? Like Aileen, the movie takes its time to find its feet and occasionally threatens to veer off balance, but eventually, it hits surer ground.

God’s Creatures is a UK-Irish-US production staged by Nine Daughters in co-production with A24. 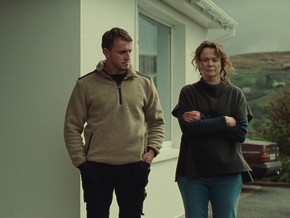