28/07/2022 - Olivier Assayas pays tribute to his own 1996 film of the same title, as well as Louis Feuillade’s silent film classic Les Vampires, in this absorbing series made for HBO

One of the most playful details in the original 1996 version of Irma Vep is how the director of the film-within-a-film remake of Les Vampires (played by Jean-Pierre Léaud) suggests Michelle Pfeiffer’s portrayal of Catwoman as design inspiration for the titular villainess. A film of the mid-90s referencing by name another film from just a few years earlier feels so uncanny — it would be like a mention of Titane in the next Tom Cruise film. New films are rarely so conscious of others around them, preferring to conceal their influences rather than blurt them out by name.

In the hyper-referential films of Olivier Assayas, the world, as well as other cinemas, tend to spill more freely into view. And so it proves here in his latest work Irma Vep [+see also:
interview: Olivier Assayas
series profile], the French director happily returning to the episodic TV mode in which he excelled with 2010’s Carlos [+see also:
film review
trailer
film profile], and arresting the downward trajectory of form of his previous few features. This series retains the premise and much of the story arc from his career-making 1996 feature of the same name, following at close quarters the troubled production of a remake of Les Vampires, the silent conspiracy serial that laid the groundwork for the disparate likes of Hitchcock, Batman and Rivette. A fashionable foreign actress — Maggie Cheung in the former case, Alicia Vikander this time around — has been jetted in to play the lead anti-hero, namely the catsuit-donning Irma Vep. This time too the production, reflecting the wider French film industry, can’t quite assimilate her alien-like presence. The series concluded its broadcast run earlier this week, after a preview showing of the first three episodes at Cannes in May.

The largest and ultimately most rewarding change Assayas makes here is expanding the role of the remake’s ailing director René Vidal, exchanging Léaud’s washed-up French New Waver for an endearing neurotic, played by Vincent Macaigne, who insists he’s making an eight-hour feature epic, rather than mere television, thank you very much. The main source of conflict is Vidal’s attempt to fully accomplish this white elephant of a project, as shady golf-playing financiers, his own variable mental health, and uncomprehending actors confused by the lack of character psychology he slavishly retains from the 1915 original, all conspire against him. But Mira, Vikander’s character, seems a kindred artistic spirit, guiding him through the mending of his tortured psyche — which feels like the prime, somewhat selfish reason for his making this new Les Vampires, no matter how much pleasure he also clearly derives from the nuts-and-bolts of filmmaking itself (look out for a virtuoso choreographer with a love of wire-work, and an on-set BDSM consultant with pincer-sharp comic timing).

Vikander’s conception of the character is deeply informed by Assayas’s work with Kristen Stewart, creating an unusually in-depth look at a celebrity actress’s working life, untroubled by the cynicism of other showbiz exposés and satires. And the on-set personages, from Antoine Reinartz’s cool-headed Director of Photography to Lars Eidinger’s libertine thesp, are lovingly pinched from Rainer Werner Fassbinder and the sadistic power dynamics across his oeuvre. But Assayas directs most of his anger to the cruel forces of capital that impede art making, and which hover over the warped, transactional human relations we see here — although he finds a glinting beauty in that, too.

Irma Vep is a co-production of the United States and France, staged by A24, Vortex Sutra, The Reasonable Bunch and Little Lamb. Distribution is by Warner Bros. Television.

VENICE 2022: In the fourth episode of our series of short videos filmed at this year's Venice Film Festival, Elena Lazic meets David Katz 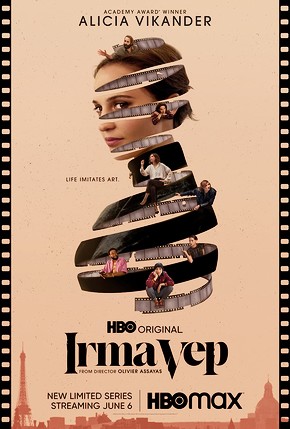