01/08/2022 - In the sweat-stained horror by Spanish filmmakers Raúl Cerezo and Fernando González Gómez, the temperature is rising and so is the tension

Perfect film for this year’s punishing heatwave, The Elderly [+see also:
interview: Raúl Cerezo, Fernando Gonzá…
film profile] shows just how bad things can get when it’s really, really hot. It’s not the kind of easy breezy summer everyone can enjoy – here, the temperature makes it hard to breathe and fries your brain to the point where nothing is clear anymore. Is your beloved grandpa Manuel (Zorion Eguileor) just tired or has he gone loco, should everyone run or just stay hydrated? It’s hard to make any informed decisions when you are sweating your eyeballs off, but in the end, this hesitation may cost you dearly.

Following his wife’s tragic death, deemed a suicide, things get significantly worse for the man. His family comes over to help, albeit grudgingly, as they are already fighting over a plethora of things. They are scared of his actions at times, of his violent outbursts, but they don’t really do anything, even when he matter-of-factly tells them he is going to kill them. “Grandpa is old and sad. It’s normal, no?” says his granddaughter, and that’s part of this film’s twisted charm. If everyone already looks down on you, why not use it? Why not revel in their guilt, in their pity, and then make a move?

This set-up alone makes this Spanish horror a very atmospheric proposition, justly awarded at this year's Fantasia for Eguileor's committed, complex turn. For the longest time, nothing is clear, apart from the fact that these suffering people are bound to explode at one point. But apart from the scares, there is something uncomfortably real that directors Raúl Cerezo and Fernando González Gómez are trying to capture. If being old is “gross” and nobody ever listens to you, you can either accept it or you can rebel. The latter is probably more fun.

In a way, The Elderly is a film about being ignored, or even invisible. Yet although nobody is interested in his memories, that doesn’t stop Manuel from talking about them. And so, old songs are playing and old tales are retold – sometimes, the past just grabs the present by its throat and refuses to let go.

Although they are reuniting with some of their past collaborators again, including DoP Ignacio Aguilar, it’s a deeper story than the duo’s previous film The Passenger, [+see also:
trailer
interview: Raúl Cerezo and Fernando Go…
film profile] frequently unpleasant and yet involving, not to mention nicely shot, with its browns and yellows giving off a feel of a world that has already died and dried up. The end is not as satisfying as what comes before, and feels oddly forgettable, but The Elderly is still a weird statement of sorts. These people want to be acknowledged, they want their bodies to be noticed and their experiences to be shared. So open your eyes and see them, or be ready to pay.

The Elderly was produced by Jose Luis Rancaño and is a Persons Films and La Dalia Films production. Sales are handled by Filmax.

more about: The Elderly

The directors and the writers of this twisted new feature, in which older people are done being ignored, talk about it

In the sweat-stained horror by Spanish filmmakers Raúl Cerezo and Fernando González Gómez, the temperature is rising and so is the tension

European flicks The Elderly, Megalomaniac and Orchestrator of Storms will celebrate their world premieres at the Canadian genre festival 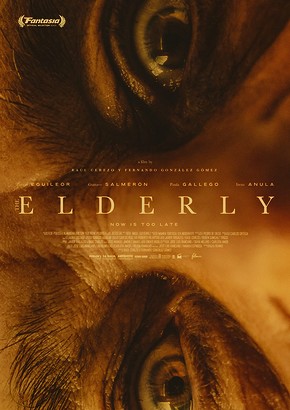