In her first feature film Sister, What Grows Where Land Is Sick? [+see also:
trailer
film profile], Franciska Eliassen gets back to exploring a theme close to her heart, which she already examined in short form via Sister (2019); namely, the bond that exists between sisters. Using her own personal experience as a starting point – her sister, like the protagonist, “suffers” from mental health issues – the Norwegian director broadens the scope of the discourse surrounding the question of “normality” to include our need to reassure ourselves by dividing the world into prescribed categories, which many people don’t or don’t want to fit into. The result of her reflection is an art house film which never drifts into pure aestheticism, a fantastical and poetic tale which depicts the wanderings of a troubled mind and which was presented in the Cineasti del Presente section of the 75th Locarno Film Festival.

Accompanying us on this fascinating yet frightening journey through Vera’s (Ruby Dagnall) mind is her little sister Eira (Keira LaHart) who, in a desperate attempt to understand her sister’s mysteries, secretly reads her diary. Vera and Eira’s day to day life is dominated by the majestic mountains and fjords of northern Norway, to which the family withdrew in order to alleviate the stresses and worries which keep their mum confined to her bed.

Although nature seems to reign supreme, majestic and mysterious, Vera can’t stop tormenting herself over the disastrous state of the climate and the severed ties between mankind and the world enveloping us. In this sense, plants, lichen and animals take on a central role, transformed into repositories of a sense of worry - Vera’s worry - which slowly turns into a phobia. Under Eira’s gaze, which goes from uncomprehending to empathic, Franciska Eliassen urges us to think about the concept of “normality”, about the way in which social norms shape our lives, imposing nigh-on automatic emotive reactions.

By reading her sister’s diary, Eira discovers a mysterious world composed of dazzling light but also corners of deep darkness, an agitated and terribly authentic world which couldn’t care less about conventions. A character who seems to come from a far-off past composed of mythology and ancestral legends in harmony with nature, Vera represents our own animality, an elusive something which threatens to overturn any equilibrium. It’s no coincidence that the director studied ecology and philosophy, as well as Fine Art. Indeed, those themes which are important to her – the environment, but also mental health – are everywhere in the film, expressed through elaborate mise en scènes where mysterious characters dressed in colourful, sequin-sprinkled tunics roam through the woods as if asserting their presence.

By way of these dreamlike moments, the director expresses that which is tangible for Vera, but which others would sooner keep hidden. Slowly, slowly, little by little, Eira becomes more closely acquainted with the creatures crawling out of her sister’s mind, gaining access to an underground world whose existence is denied decisively and scornfully by society. But what if the world were far bigger than everyone wants us to believe? What if there was room for everybody, “normal” people and “crazy” people? These are the questions which Eira tries to respond to in a captivating toing and froing between oneirism and the simplicity of nature. It’s an intriguing first film by a director who clearly knows what her priorities are.

Sister, What Grows Where Land Is Sick? is produced by Franciska Eliassen alongside Hummel Film and Filmreaktor.

more about: Sister, What Grows Where Land Is Sick? 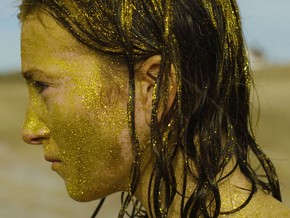 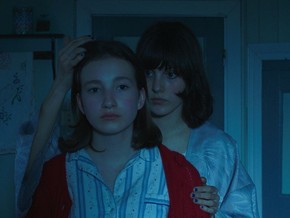 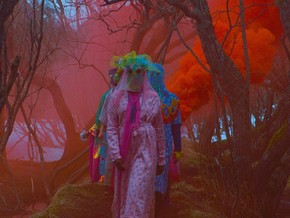