09/09/2022 - VENICE 2022: Yasmine Benkiran’s debut feature is a parable on female emancipation in Morocco transposed into a hard-hitting road-movie, replete with police tails

"These girls have a certain style". Much like this remark made by one of the police officers who has been duped while hunting for an escaped female convict who has picked up her pre-teen daughter and a young female mechanic - who was trying to escape her husband - during her breakneck-speed descent from Casablanca to southern Morocco, Yasmine Benkiran’s first feature film Queens, which closed the 37th edition of International Film Critics’ Week - unfolding within the 79th Venice Film Festival – is by no means short on panache or originality. Grafting achingly rock ‘n’ roll genre film features (evasion, vehicle theft, roadblocks, gunfire exchange, false leads, unexpected encounters, etc.) onto a story about the social and cultural obstacles to female freedom, the film advances along its path of adventure and fable at 100 miles per hour, flaunting the many lines it crosses in terms of disobedience and faith in the power of imagination.

Our localised Thelma and Louises are called Zineb (Nisrin Erradi), Asma (Nisrine Benchara) and Inès (Rayhan Guaran). Incarcerated for drug crimes and a dab hand at robberies and theft of all kinds, the former is on the run after seizing (following a very physical fight) a warden’s service weapon. Having surreptitiously picked up her 11-year-old daughter Inès, who had been placed in a child protection centre, Zineb randomly crosses paths with Asma who works in the basement as a mechanic, dreaming about the outside world, which she only catches glimpses of through a basement window, suffering a forced marriage by night. After stealing the delivery truck which was transporting Asma, Zineb forces her to come along on an escapade which takes them almost 800 kilometres away, by way of incredible adventures, to Tan-Tan beach. But two national security police officers set out on their trail: highly seasoned Nabil (Hamid Nider) and 35-year-old Batoul (Jalila Talemsi) who is working her first case.

A road-movie unfolding over four days, Queens curries favour for its energy, rhythm, the quality of its two main adult actors’ performances and Pierre Aïm’s photography (who draws the best out of the magnificent landscape the women travel though). Distilling its socially minded intentions in tiny touches, under an exterior of almost "cartoon-esque" action, the film feels slightly less convincing for the smattering of local myths (Kandisha, djiins, scarabs) carried by Inès’ character. But it’s a minor drawback, which is soon forgotten on account of the speed and suspense of the story which makes sure its viewers have a ball.

The producers of Yasmine Benkiran's film are invited to speak about their collaboration and the financing of their film, which has received Eurimages support

VENICE 2022: Yasmine Benkiran’s debut feature is a parable on female emancipation in Morocco transposed into a hard-hitting road-movie, replete with police tails

15 films to be touted in Berlin by Kinology

Yasmine Benkiran's Queens has been added to the sales agent’s slate, which also includes Emmanuel Mouret, Jean-Paul Civeyrac and Manu Laskar, as well as Luc Besson’s reboot of the Arthur franchise

The big winners during the body’s latest round of funding were the drama series The Life and Laura H., as well as Saskia Diesing and Ben Verbong’s new fiction features 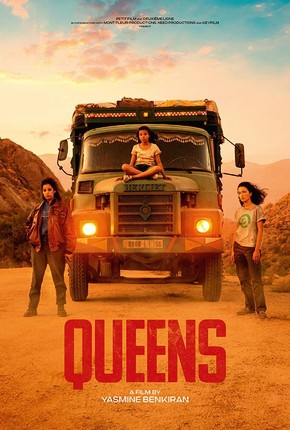