23/09/2022 - In his bold style, Ulrich Seidl dares to tackle the subject of paedophilia head-on, turning his protagonist into someone who cannot escape from himself

Georg Friedich (second from the right) in Sparta

Sparta [+see also:
trailer
film profile] is the talk of the town. After a report was published accusing unethical filming practices, the Toronto Film Festival withdrew the film from its programme. However, it has been screened at the 70th San Sebastian Film Festival, where its director, the always controversial Austrian Ulrich Seidl (few like him dare to show the most gruesome aspects of our first world) has refused to present it because, he says, "the film speaks for itself".

And what is Sparta about? A subject as difficult as paedophilia (and self-control). It is also about a family (this film is linked to his previous film Rimini [+see also:
film review
trailer
interview: Ulrich Seidl
film profile]) whose father, in an old people's home, is far from being a saint. The youngest of his sons (played by Georg Friedich), whom he does not respect despite him caring for him, cannot stay with girlfriend because something tortures him: he enjoys playing, cuddling and being with children more.

The camera of the director of the Paradise [+see also:
film review
trailer
film profile] trilogy (much more bestial and explicit than the film in question) accompanies this subject to Romania, where he transforms a decaying school into a camp for young warriors: to do so, he recruits children from broken homes, to whom he offers a haven of recreation, training and teamwork. But we never see a naked child on screen. Although there is some doubt and tension as to whether at some point the adult character might abuse one of them.

Sparta, which addresses such a sensitive topic (which is also the focus of the recent work of another great European filmmaker this season), portrays, in his style bordering on documentary, a being imprisoned by his impulses, which he tries to control.

Did the film not respect child protection laws during its shooting? Well, according to José Luis Rebordinos, director of the San Sebastian Festival, "this, with the subsequent evidence, will have to be confirmed by a judge". Sparta may bore us, make us uncomfortable or displease us, but no one - unless it can be proven that a crime has been committed during its making - should prevent us, as viewers, from having the option of watching it.

Because it is also a feature film that dares to delve into the most dismal desires, portraying a type of human being who may be sitting in the next seat. This is also what cinema is about: speaking - freely - of what is forbidden, hidden and terrible (it would not so bad to revisit today, for example, the filmography of Pier Paolo Pasolini).

Sparta, with a script written by the director and his partner Veronika Franz, is produced by the Austrian Seidl Filmproduktion GMBH, the German Essential Filmproduktion and the Parisian Parisienne de Production, with the support of Arte France Cinéma. Its sales are managed by the French agency Coproduction Office, which has also contributed to the financing.

In his bold style, Ulrich Seidl dares to tackle the subject of paedophilia head-on, turning his protagonist into someone who cannot escape from himself

11 European (co)productions are world-premiering across the two sections, which also include several international and North American premieres

French sales agents whip out new aces at the EFM

BERLINALE 2022: Ulrich Seidl returns after a decade-long absence from fiction filmmaking with a characteristically harrowing work, which still finds glints of light in the void

Review: Tax Me If You Can 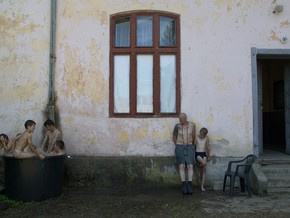