Iman Sayad Borhani and Payar Allahyari in A Tale of Shemroon

Remnants of the old world and the promises of a new one: in A Tale of Shemroon [+see also:
trailer
film profile], the feature debut by Iranian director Emad Aleebrahim Dehkordi, which premiered in San Sebastián’s New Directors section, two brothers deal in contrasting ways with the state of near-limbo that their generation finds itself in, with some devastating results. Iman (Iman Sayad Borhani) and Payar (Payar Allahyari) are brothers, and although they are close, they are also very different. The former leans into the party-loving drugs scene of Tehran, the merchandise supplied by wealthy tourists and locals returning from the West, and tries to make a few easy bucks by getting involved in its trade. Payar, meanwhile, an overall calmer and less fidgety presence, stays focused on his boxing ambitions. Despite their contrasting temperaments, the two siblings are happy to let each other be, and their lives barely intersect. But this is indeed a tale because, unbeknownst to them, their every action forms part of a much bigger web of cause and effect, where what goes around always comes around.

Dehkordi takes his time to show how this might be, and the film is in fact more interesting and perceptive before its various strands all come together in a violent and sad, but slightly far-fetched, finale. The director, who also wrote the screenplay, proves more subtle and masterful in unveiling the various tensions at work in the everyday lives of these two twentysomethings. Both brothers are attached to a piece of land that still belongs to their family, a rare relic from more prosperous times, before their mother (who passed away not long before the film begins) sold big chunks of it away at a loss to a duplicitous relative. They could stand to make money from what is left of it now, but refuse to abandon that last trace of her. At the same time, both young men are more than willing to leave many other aspects of traditional Iranian culture behind. Iman is the most vocal rebel, with his drugs and his partying. But his recreational use, in a country rife with drug addiction and trafficking, does not in fact get him in trouble per se; Dehkordi suggests it is more of a pastime for an aimless generation. In fact, Iman’s rejection of the past is almost entirely embodied in the figure of his father, an elderly man of ill health, whose ability to send his son into a rage with any passing remark hints at a long history of tension between the two.

Although Payar is more respectful of his elders, he, too, finds himself attracted to the more liberal aspects of Iranian life, notably in the figure of a former schoolmate who is in town for a few weeks. Hana (Masoumeh Beygi) lives in Paris, has a son and has recently got divorced; she is a modern woman, and brushes away her mother’s worries about her looking “too pretty” to go out when she leaves for a date with Payar — a passing but haunting reference to a law behind the current mass revolt in Iran, following the death in custody of a young woman arrested for the way she had veiled her hair.

Focusing on two brothers who are simply trying to live according to their values, Dehkordi remains entirely non-judgemental, granting both siblings the same level of care and attention. Through this dual portrait, the director elegantly reveals the dynamics that constitute Iranian society at large and which remain largely invisible to his protagonists, even as these forces ultimately push them in a direction they did not choose. This realistic mode, avoiding the clichés of the careless brother versus the goody two shoes, also allows for some sterling performances from its cast, chief among them Iman Sayad Borhani as the energetic yet intelligent and caring brother, and Masoumeh Beygi as the young mother for whom Iran is almost a holiday. A Tale of Shemroon is a low-key affair but reveals a director with an intelligent grasp of narrative structure and characters, and a refreshingly light touch.

more about: A Tale of Shemroon 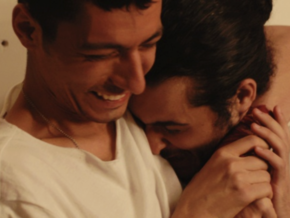