A contemporary, female, psychological revisiting of the western genre which leaves room for a new typology of heroes and antiheroes, which drills down into characters’ emotional spheres and, through the utopian dream of a city which welcomes everyone with open arms, which also speaks of the present: Francesca Comencini’s TV series Django [+see also:
trailer
series profile] has enjoyed its world premiere within the 17th Rome Film Fest’s Freestyle section. Helming the first four episodes of the series, and acting as artistic director for the entire project, the Roman director (Lo spazio bianco [+see also:
film review
trailer
film profile], Stories of Love that Cannot Belong to This World [+see also:
film review
trailer
interview: Francesca Comencini
film profile], series Gomorrah and Luna nera [+see also:
series review
series profile]) has pulled a blinder with this ambitious English-language production by Sky and Canal+, which boasts an exceptional international cast and is loosely based on Sergio Corbucci’s 1966 movie. The first two episodes, which were screened in Rome, left audiences thrilled and fascinated. But they’ll have to wait until 2023 to see the remaining eight, which Enrico Maria Artiale (The After Match [+see also:
trailer
film profile], series Romulus) and Brit David Evans (Downton Abbey) will take it in turns to direct.

In the meantime, Roman audiences were given a taster of this new Django, who borrows the features of the brilliant Matthias Schoenaerts, a gunslinger with a melancholic air and a father tormented by feelings of guilt, who goes hunting for the truth about his family’s massacre in New Babylon, a town built in a crater in Texas. Seven years have passed since the end of the American Civil War, and a small community of white and black people live in this place where weapons aren’t allowed and where everyone is free and equal. The founder of New Babylon, John Ellis (Brit Nicholas Pinnock), is about to marry young orphan Sarah (German actress of Italian origin Lisa Vicari), when the arrival of a mysterious cowboy called Django calls everything into question and throws the city off-balance.

After an adrenaline-filled fight scene where the new arrival shows his strength, not to mention his good heart, Sarah’s eyes meet Django’s: he’s the father she hasn’t seen since she was a child. The sole survivor of the family massacre, Sarah holds her father responsible for what happened and refuses to forgive him. But Django doesn’t give up; he’s willing to do anything it takes to win back his daughter’s love, a deep and tender love which is conveyed through glorious flashbacks to a happy, past family life. He subsequently offers Ellis much-needed help to defend New Babylon from Elizabeth Thurman (the brilliant Noomi Rapace, who was handed the Progressive Career Award in Rome by jury president, director Marjane Satrapi). Ultra-Catholic Elizabeth is the powerful governor of neighbouring Elmdale who would like to annihilate New Babylon’s sinful community, depriving them of all aid. But New Babylon realises it has a new weapon in its armoury to guarantee its survival: oil.

A male protagonist wrestling with his emotions; a female antagonist who proves to be the fiercest defender of the patriarchal order… In Comencini’s Django, the roles are subverted to astonishing effect, against the backdrop of a society where diversity is seen as an opportunity for the future by some, and as an out-and-out threat by others: in short, it’s an incredibly current context. All of which is enveloped in a visually captivating style and endowed with a frantic pace, suffering no shortage of shoot outs, hangings, staring contests and wild landscapes. It’s definitely a good start for this new take on the Wild West.

Django is an Italian-French co-production by Sky and Canal+. It will be broadcast in 2023, screening exclusively on Sky and streaming on Now in all territories where Sky is active, as well as on Canal+ in France, Switzerland, Benelux and Africa. International distribution is entrusted to Studiocanal.

Speaking as one voice, the group has already produced nine high-end series and will aim to target younger audiences, promoting Europe’s values and creative talents

The project, an English-language reimagining of Sergio Corbucci’s western, will star Noomi Rapace, Nicholas Pinnock and Matthias Schoenaerts in the lead roles 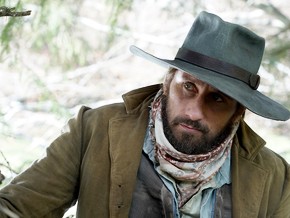