Sadaf Asgari and Ghazal Shojaei in Until Tomorrow

When Ali Asgari’s second feature, Until Tomorrow [+see also:
trailer
film profile], premiered in the Berlinale’s Panorama section earlier this year, it seemed like it might or might not become a “festival darling” in the near future, not because of its qualities, which were never in any doubt, but because of the relative lack of novelty, given that it tells a typical Iranian story about individuals fighting against the rigid and unjust system. In the meantime, the development of events in Iran has made Until Tomorrow look like one of the most socially important films of the year and a prequel, of sorts, to the ongoing revolution, which explains its causes.

Until Tomorrow has played at several festivals like Zurich (where it won a Special Mention in the international competition – see the news), but the pace of the bookings has sped up recently, with Valencia, Zagreb and Stockholm all lined up. At Zagreb, the film is being screened in the parallel Together Again programme, since Asgari already competed at the gathering with his feature debut, Disappearance, five years ago.

Fereshteh (Sadaf Asgari, the filmmaker’s niece, who also starred in Disappearance) is a single mum living in a block of flats somewhere in Tehran. She is tired but happy, juggling her work at the print shop and taking care of her two-month-old daughter. However, one phone call changes everything and reveals how desperate her life situation is. Her parents are about to come to the city later that evening: they do not know, and must not learn, about their daughter having a child out of wedlock. So Fereshteh must find places to put the baby, and all the baby stuff, until the next day. Even the “stuff” aspect proves to be an issue in a country where surveillance and paranoia feed off each other, which makes finding someone to take the baby girl in and take care of her for the night almost impossible.

Luckily, Fereshteh has one true friend, Atefeh (Ghazal Shojaei), ready to help as much as she can (she lives in a student dorm, so she cannot take the baby in herself), and the two girls start their urban road trip from one unlikely idea for a solution to another, encountering people who might be good or bad in their hearts, but who are all controlled by their fear of some authority figure. They will likewise encounter threats, scheming and extortion, but will also share some “girl power”-like encouragement over a cigarette as night falls over the city.

Given that it is similar to Ali Asgari’s previous entry, in which a couple seek medical assistance after their first lovemaking attempt has gone wrong, as well as a number of Iranian and non-Iranian socially aware films, Until Tomorrow could have ended up wallowing in the stale waters of drabness, filmed in typical, hand-held, long takes that follow the protagonists on their (futile) efforts. However, Rouzbeh Raiga’s camerawork is less shaky and more colourful than that, with a special emphasis on striking contrasts (such as the baby’s pink clothes against the encroaching darkness), Ehsan Vasehi’s editing keeps the tempo and the dynamism close to the territory of a thriller, and the script written by Ali Asgari and Alireza Khatami offers some much-needed breaks from the overwhelming darkness in the form of some slightly absurdist humour. Nevertheless, the real selling point of the film is Sadaf Asgari, who seizes the opportunity to show off her marvellous acting skills, especially later on in the film, and persuade us that her character’s fight is also our own struggle, making Until Tomorrow one of the strongest emotional viewing experiences of 2022.

more about: Until Tomorrow

Want to know how our Top 2022 came to be? Here is a breakdown of the individual votes of our journalists who took part

Until Tomorrow emerges triumphant at the 37th Mostra de València

The exciting co-production between Iran and France wins the Golden Palm for Best Film at the festival, as well as the awards for Best Director and Best Female Performance

The light of Mediterranean cinema shines especially bright in Valencia

The 37th Mostra de València - Cinema del Mediterrani will kick off with Jordi Núñez's What We Know and will also pay tribute to Robert Guédiguian, Lluís Rivera and Lucile Hadzihalilovic

Laura Mora Ortega has won her second big prize in a month, following her victory at San Sebastián, whilst Elena Avdija’s Stuntwomen was awarded the Golden Eye in the Focus Competition 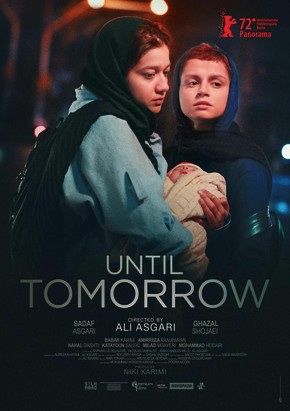