14/11/2022 - Rising British filmmaker Thomas Hardiman’s debut is a bejewelled tribute to great hair, and the salon artists who make it

The UK’s reputation as being a socially unfriendly place – where people might prefer to gaze upon their shoes or newspapers than make eye contact – comes a cropper once sitting in a hairdresser’s chair. Whether it’s an upmarket atelier or a lowly barber’s, the hair salon might be one of the sole environments in British society where any pretence is lowered, allowing conversation, gossip and grooming tips to flow at will, sometimes between social strata that might otherwise not interact.

It’s this vision of the coiffeur’s as an egalitarian meeting point between high and low culture that clearly fascinates young British director Thomas Hardiman, who’s chosen to set his spirited debut feature, Medusa Deluxe – showing this week at Stockholm, following its Locarno world premiere – amid the bustling atmosphere of a regional hairdressing competition, with a result akin to the reality show RuPaul’s Drag Race if it were shot like Birdman. Liberated from the functional short-back-and-sides and tidy-up trims of their day gig, the flamboyant hair artistes gathered here finally get to preen and devise a “Georgian Fontage” and “white fork braids”, all of which sound made up by Hardiman (who’s also on screenwriting duty), but are surely available for the right price, perhaps in Chelsea or Mayfair.

What’s more, Medusa Deluxe is also an authentic “murder mystery”, that surprisingly in-vogue sub-genre, although the tropes of the opening-act dead body and the bevy of suspects are red herrings in themselves, an excuse to create a cross-cutting ensemble piece and community portrait in the manner of Robert Altman, a cited influence for Hardiman. It’s also a stock example of a certain kind of forward-thinking early-2020s festival film, with its showy, one-take cinematography, sexual fluidity and copious neon filters: high-concept and grabby in a way that surely helped it sail through various pitch meetings. The resulting work feels like a promising idea that clearly deserved an airing, but not one fully brought to fruition, especially as a piece of dramatic writing.

We never meet Mosca, the deceased hair-stylist competitor, nor see his gruesome punishment of a scalping. Instead, Hardiman alights on his colleagues and intimates, such as the competition’s impresario René (Darrell D’Silva), a former lover of Mosca’s, bedecked in a peroxide Elvis quiff and sculpted sideburns. Angél (Luke Pasqualino), the victim’s partner, is the other side of this love triangle, and his smuggling and distribution of illegal hair-loss medication provides another curl to the mystery.

Hardiman, with his background in the fine arts and glossy advertising spots, provides a visual contact high that just about compensates for his film’s less arresting elements. The dialogue is theatrically delivered and peppery, shrouded in insult humour: “You Pantene Pro-V cunt” goes one piece of verbal abuse from the bolshie key suspect, Cleve (Clare Perkins). Although reliant on arbitrary and over-convenient plot detours to bring his ungainly piece to its conclusion, the director transcends this through his infectious, justified passion about hair, and its role in actualising the self, like a guileless trainee at a high-spec salon. Only here, the seated client is the cinema spectator, and filmmaking the possibility-rich creative outlet.

Medusa Deluxe is a UK production staged by EMU Films and Time Based Arts, with support from BBC Film and the BFI. Its world sales are overseen by New Europe Film Sales.

Rising British filmmaker Thomas Hardiman’s debut is a bejewelled tribute to great hair, and the salon artists who make it

The festival kicks off its 55th edition on 6th October, with a host of national and international genre films, including the latest from Jaume Balagueró and Carlos Vermut

The primo UK film gathering has unveiled a starry array of gala screenings, with its full programme comprising 164 features and 23 world premieres 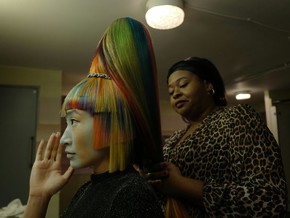 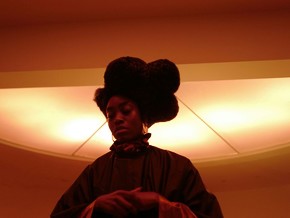