Premiered at the Geneva International Film Festival (GIFF) in the Highlights section and currently broadcast on Play Suisse as well as scheduled from 8 to 15 November on RTS, La vie devant [+see also:
trailer
series profile] is the first TV series written and created by Swiss-Italian humorist Frédéric Recrosio, in collaboration with Peruvian-Swiss director and screenwriter Klaudia Reynicke Candeloro (co-showrunner and art director), internationally known thanks to her first two feature films The Nest [+see also:
film review
trailer
film profile] (2016) and Love Me Tender [+see also:
film review
trailer
film profile] (2019), and Canadian director and screenwriter of Russian and Swiss origin Kristina Wagenbauer (Sashinka, 2017). The series transports us into the intimacy of a family grappling with existential changes that transform them to the core.

La vie devant is a pastel-toned tragicomedy that follows a series of characters at the edge of the precipice, at once imbued with a touching tenderness and a darkness that only deepens. Divided into six 45-minute episodes, Recrosio’s new creation can be described as a sad comedy, a succession of characters who seem to be prisoners of their own obsessions. Despite this, the narrative never lapses into melodrama; on the contrary, sadness is transformed into a thread that guides and structures the life of a family living under the yoke of an impending tragedy.

The central pivot of this complex mechanism is little Lucas (Solan Harsch), who has to deal despite himself with the often extravagant existential tergiversations of adults. His father Diego (Alexis Loret), a former Olympic swimming champion turned coach struggling with a young swimmer who has taken a fancy to him, his mother Valeria (Audrey Dana), a heart surgeon who could go down in Swiss medical history, his grandfather Umberto (Reno Girone) trying to face the demons of the past, his uncle Vincent (Leon Boesch), a young singer inhabited by an endless speen, and his other uncle, Jean, a composer in the throes of inspiration (Carlos Leal) are the members of this family at once melancholic and touching. Everyone tries to survive as best they can while dealing with the difficulties of a sometimes suffocating everyday life: ambitions that turn into obsession, ghosts of the past that suddenly knock on the door or daydreams that violently confront reality. The accelerator of this collective questioning is Valeria whose body, overwhelmed by fatigue, suddenly gives way.

La vie devant tackles sensitive subjects such as suicide, depression or marital problems without allowing itself to be overwhelmed by sadness, with a welcome dose of humour and self-derision accompanying the characters and allowing them to breathe. It is precisely this calibrated and harmonious mixture of tragic and futile, of sadness and the banality of everyday life, that makes the narrative captivating and engaging.

Despite a love story that is perhaps a little too conventional and naïve (the one between Vincent and Joëlle), La vie devant manages to avoid clichés by proposing to follow the intimacy of a bourgeois family struggling to find meaning in existence. Recrosio courageously questions the passing of time and the representation that each of the characters makes of his or her age.

Whether it be first loves, relationship crises or a third age lived with revolutionary wisdom, the characters of La vie devant try to disentangle themselves as best they can in an everyday life that has become alien, a prison built by themselves from which they can no longer escape. 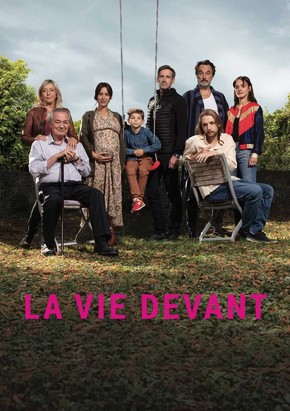