Review: A Cup of Coffee and New Shoes On

In 2013, two Belgian twin brothers, both 45-year-old shoemakers from the town of Putte, put on a new pair of shoes and had a cup of coffee with their relatives before saying goodbye to them and leaving to get euthanised. Although they had not been diagnosed with a terminal disease, they were already deaf and the new diagnosis was of a degenerative disease that would eventually leave them blind as well, thus their plea for euthanasia was approved.

The premise of that story served as an inspiration to Albanian filmmaker Gentian Koçi for his second feature, A Cup of Coffee and New Shoes On [+see also:
trailer
interview: Gentian Koçi
film profile]. The film has just premiered in the Official Competition of Tallinn Black Nights, and was picked as the Albanian Oscar entry even before the premiere itself.

Agim and Gëzim (Portuguese twins Rafael and Edgar Morais, respectively) are identical and inseparable twins who have been deaf since birth, which means they are each other’s primary companions. They live together in a flat in Tirana, where Gëzim’s girlfriend, Ana (US-based Kosovar actress Drita Kabashi), visits them on a regular basis. They work together in a carpentry workshop and spend their free time together, usually going to their cabin and the mountains.

One day, while driving back from work, Agim’s vision starts getting blurry, and he almost causes a fatal accident, so he goes to see his ophthalmologist. The diagnosis is not good, as he is about to lose his eyesight – and to make matters worse, the same will happen to Gëzim later on. The idea that, after a lifetime in silence, they will have to accept the darkness as well deepens the rift between them and the world, as well as the rift between the brothers. A decision has to be made, over a cup of coffee and with new shoes on.

A Cup of Coffee and New Shoes On clearly shares a lot of traits with Koçi’s debut feature, Daybreak [+see also:
film review
trailer
interview: Gentian Koçi
film profile] (2017), as it is a carefully measured exercise in subtlety with a perfect mise-en-scène (as demonstrated in the opening scene of the routine that the trio shares), realised with great attention to detail. The plots of both films mostly take place inside flats, but A Cup of Coffee and New Shoes On cares even less about the exterior world, outside the bounds of the one that the brothers share, and is more focused on their emotional states.

Koçi also repeats the collaboration with his Daybreak cinematographer Ilias Adamis, who always faithfully captures the events and the emotions from the right distance, opting for static takes with some rigorously symmetrical framing. While the rhythm of the succession of usually long takes works perfectly in the beginning, thanks to editor Myrto Karra, the drop in tempo halfway through threatens to hamper the film; nevertheless, the intensity of the emotions between the characters keeps up the momentum.

Special attention was paid to the casting and working with the actors. The Morais twins were selected after an international audition call: they are professionally trained actors who are not actually deaf, but they had to learn Albanian sign language for the role. Their primary task of channelling the connection between the twins, which helps them conquer their impairments, is handled perfectly, while the presence of Drita Kabashi as Ana, a person who wants to offer them physical and emotional support, is also priceless.

A Cup of Coffee and New Shoes On is a co-production between Albania, Greece, Kosovo and Portugal, involving Artalb Film Productions, Graal Films, Maria & Mayer and Added Value Films. m-appeal handles the sales.

more about: A Cup of Coffee and New Shoes On

Interview: Gentian Koçi • Director of A Cup of Coffee and New Shoes On

"This story and these characters, who are forced to invent a completely new language, challenged me in my use of film language"

The Albanian director discusses his film, which follows two identical deaf-mute twin brothers who discover they will also progressively and irreversibly become blind

Episode 26: A Cup of Coffee and New Shoes On (Albania/Greece/Kosovo/Portugal)

The producers of Gentian Koçi's film are invited to speak about their collaboration and the financing of their film, which has received Eurimages support

Review: A Cup of Coffee and New Shoes On

The Greek pubcaster is backing 14 national and international co-productions with a total of close to €950,000 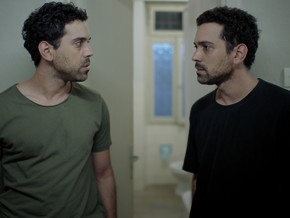