Sophie Barthes’ The Pod Generation, set in the near future and screening in Premieres at Sundance, starts with a premise that actually makes sense. Why bother with pregnancy, with nausea and all those weird cravings, if a child can safely grow in a detachable womb instead? A pretty one, too, shaped liked an egg, that both partners can carry around if they so please. Oh, and your employer can actually help out with the down payment.

Rachel (Emilia Clarke, who continues to excel in eyebrow acting) is certainly tempted. Married to botanist Alvy (Chiwetel Ejiofor), she is the one who earns the real money and is currently up for promotion. Why should she lose the momentum, it is argued here, if they could just invest in a little pod of their own, feed it via an app and go on uninterrupted? It’s almost as if someone had brought back the 1990s Tamagotchi phenomenon – also egg-shaped, by the way – and decided to up the stakes.

It's a very practical sci-fi spectacle that Barthes delivers here, with the kind of environment that feels recognisable, if slightly upgraded. Homes and offices are pastel-coloured and minimalistic, Siri is now pretty much omnipresent and can take your coffee away if she detects one note of annoyance. The world is clean and quite pleasant, at least for those who have money, and only plant-loving Alvy bemoans the loss of “natural ways”.

Predictably, he is not too thrilled with the idea of a pod baby – later, the roles will switch. And… that’s about it, as once Barthes establishes the main concept, there is no story left to explore it. You get an underdeveloped embryo that doesn’t know what it wants to be when it grows up: a comedy, satire or drama about the many pressures of motherhood.

There is a nagging feeling of a wasted opportunity here, for something much funnier or at least with a bit of an edge, as any suggestions of something sinister at play – apparently, kids born this way cannot dream – also go nowhere. Barthes settles for safe sweetness instead, which will probably increase the film’s commercial chances. But it feels very, very frustrating.

Mostly because people do tend to worry that pregnancy, or having children in general, is just not convenient these days. It’s too expensive, too demanding. The idea that at least one part of the process could already be taken care of, that a woman wouldn’t have to feel like another force is taking over her entire body for months, is not entirely without merit. Especially after listening to yet another man praising the beauty of a “natural” birth.

But Barthes leaves all of these questions just hanging there, ultimately delivering something that – while pretty – feels pointless. The universe she creates also starts to make less sense as time goes by, as if encouraging hate-watching. For example, why would a younger generation freak out when asked to eat a natural fig, or even touch a real tree, when all it takes is one trip and they can be surrounded by what looks like a Swedish forest?

Then again, there is one observation that rings true: technologies might evolve, but the stigma of the “distracted mother” stays put. Although a deal with The Womb Centre seems to be favoured by corporations, keen to keep their ambitious female employees busy, motherhood isn’t exactly embraced in the workplace, so you’d better stuff your pod in a closet before HR sees you. Oh, and they also tell you that “progress has never made anyone redundant”. It might be the right time to run off to that Swedish forest. Now.

The Pod Generation is a Belgian-French-UK production staged by Quad Films and Scope Pictures. mk2 handles its international sales.

more about: The Pod Generation

Mikhaël Hers’ The Passengers of the Night and Carla Simón’s Alcarràs shine bright in the sales agent’s line-up, alongside upcoming titles by Marie Kreutzer and Serge Bozon 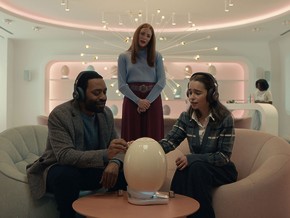