Those who do not reside in the Nordic or Baltic countries probably find it mildly ridiculous when faced with the idea of the sauna being something sacred, with clichés of cramped gym and urban leisure-centre sweatboxes abounding for the uninitiated. But with UNESCO placing the Southern Estonian county of Võrumaa’s smoke-sauna tradition on the list of the Intangible Cultural Heritage of Humanity, it shows how integral that sauna is to the lives of many people and societies. Smoke Sauna Sisterhood [+see also:
trailer
interview: Anna Hints
film profile], Anna Hints’ feature-length documentary debut, screening in Sundance’s World Cinema Documentary Competition, is, on the one hand, a celebration of the sauna, exploring the rituals and folklore that lie behind the experience. But it’s also a paean to the healing power of the smoke sauna – as much spiritually as physically – and the inner strength of the protagonists who attend it.

“In the protective darkness of the smoke sauna, all emotions can come out, and no experience is too harsh or too embarrassing” 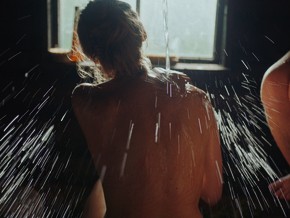