In the early images of the film, Fanny, body is slightly cut in half, doesn’t quite fit into the frame. When we do get a head to heel shot, it’s from behind, on the road where she’s striding along at a brisk and determined pace. We won’t see her face until she’s ready, i.e. when she’s looking at her reflection in a mirror. The camera moves slowly, follows her footsteps and waits. Each view reflects her expression. Each shot lands on this recalcitrant body, which tenses up at the approach of other people, let loose among the grass in the fields. More than anything, Fanny is a body struggling with the voices she hears, against this plethora of words which frame her and attach themselves to her: at best, different, at worst, abnormal. In short, a body putting up a fight.

Natalie Boutefeu reminds you of Chaplin or Buster Keaton when she swallows a tart stolen from her neighbour or carries fifteen or so chairs on her back. She’s one of those clumsy clogs who bumps into reality and bursts it wide open. But with her cigars, her surveyor’s steps and solitary rambles, she could pass for a cowboy, a surly, forsaken dispenser of justice who cares not a whit for etiquette and is no great respecter of law and order. Not the version laid down, first of all, by her doormat of a brother who is putting her up, and where she is protected, tolerated and supported. Nor that of a sister-in-law who is a little cruel and who puts on an act, not too fussy about whom she flirts with from behind her long lashes. So Fanny goes for her gun – treachery must not go unpunished – and, between the two women, it’s High Noon. But, reluctant to go back inside, she throws in the sponge and hits the road.

A film of ellipses and silences, of details and looks, Pale Eyes closes in on its subjects in two movements. The film escapes from the family unit to negotiate steep roads that lead to the edge of the world. The shots become a little longer, the silence slightly more pronounced, the travel shots more languorous. Little by little, landscapes replace the hitherto alternating indoors and outdoors shots, opening space and freeing the horizon. In her search for a dead man, Fanny crosses the border and finds herself in a forest inhabited by another lonesome stranger, silent and attentive, whom she bumps into after a burst tire. Oskar, as impassive as she is agitated, does not speak her language. But he does listen to her, or rather looks at her, a hilarious scene of boisterous gymnastics, where Fanny literally encircles this man with whom she cannot speak. The camera subsequently switches views to reveal the way in which Oskar looks at Fanny, who exhibits herself, who is, finally, seen.

Pale Eyes, soundtracked by the music of Schumann, which Fanny listens to and plays along to with her energetic hands, or which accompanies her in flight, comprises feeling, light, colour, whispering grass and wind. Custom-made to fit even the actress’s body, the film captures a presence, her movement. It plays the score of a body which has been knocked down, but which escapes and frees itself to participate in the dance, that of the other, the dance of desire.

Pale Eyes turned out to be the very last film produced by René Cleitman. We now pay tribute to the career of a multi-talented producer recognised the world over

The multiple sources of the imaginary process

In the role of the strange heroine of Pale Eyes, director Jérôme Bonnell’s favourite actress looks back at the origins and shooting of the film

The mysteries of the subconscious

At 28 and with two full-length feature films, Jérôme Bonnell’s stock is already high in the eyes of the French critics. Recognition that does not seem to deviate him from his chosen path

A web of unfaithfulness for Anaïs Demoustier, Félix Moati and Sophie Verbeeck. A Rectangle production to be distributed by Wild Bunch

Emmanuelle Devos hops on the train in Just a Sigh

The actress lights up Jérôme Bonnell’s film, alongside Gabriel Byrne. Also on screens this week, films by Bellocchio, Alper and Allouache

Trying his hand at a thriller in order to give new direction to the intimate cinema of which he is so fond, Jérôme Bonnell releases The Queen of Clubs in French theatres today (Le Pacte on 58...

Shooting gets underway on Monday in the Paris area on Jérôme Bonnell’s La Dame de Trèfle (“The Queen of Clubs”). This is the director’s fourth feature after Olga’s Chignon (2002), Pale Eyes (Jean... 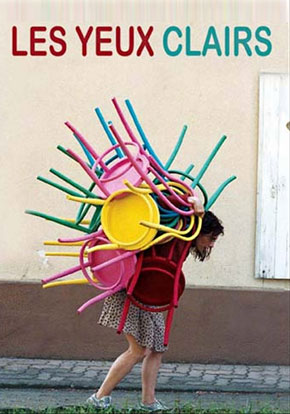