To paint or to make love

20/07/2005 - Daniel Auteuil and Sabine Azema tempted by forbidden apple in Swingers’ paradise. The latest demonstration of the subtle, far-reaching talent of the Larrieu brothers

A million miles removed from the rat race and the packed punches of action movies, the two brothers, Arnaud and Jean-Marie Larrieu, have decided to take the scen-omatograph-ic route, awash with landscapes and humanity. A quiet, peaceful environment that nonetheless boasts profound reserves of technical and scriptwriting finesse, a subtle direction of actors, a touch of humour and suggestive power that is all the more effective for being invisible. Acclaimed by numerous critics, who see echoes of Renoir in their work, disparaged by others, who find it difficult to pigeonhole them, this dynamic French film-making duo even unsettled the ballot-waving filmgoing world at the Cannes Film Festival this spring. With their third feature film, To Paint or Make Love [+see also:
trailer
interview: Arnaud & Jean-Marie Larrieu
interview: Philippe Martin
film profile], the Larrieu brothers continue to demonstrate their refreshing originality, now upping the ante thanks to actors of the stature of Daniel Auteuil and Sabine Azema, backed up in fine style by Sergi Lopez and Amira Casar. In a visual style that turns the omnipresent natural environment into a chamber of echoes and taking all the time they need to infuse an atmosphere of mellow eroticism courtesy of carefully thought out framings and slow and fluid camera movements, the Larrieu brothers firmly bring their highly sophisticated universe to the audience’s imagination under the cloak of simplicity.

After the modern young couple of A Man, A Real Man in 2003, the Pyrenean directors now focus on another stage in the life of those ordinary human beings they so love to hold the magnifying glass up to and objectively film. Having reached (early) retirement age, an "old couple", played by Daniel Auteuil and Sabine Azema (who likes to paint in her spare time), buy, on the advice of a blind man – Sergi Lopez, the fascinating village mayor, and partner, in the film, of Amira Casar – an isolated house in the heart of the Vercors mountains. Very soon, following dinner parties at various neighbours’, the two couples get to know and like one another in the manner of those no longer tied to the yoke of daily pressing engagements. A fire then leads to them sharing one roof, and shortly thereafter to tasting the delights of wife- (or “partner”) swapping. An experience that will provoke “meaning of life” discussions on the part of the bourgeois Mr and Mrs Auteuil-Azema, sowing the seeds of doubt before freeing them by revealing to them the delights of hedonism. Directed with constraint, this fabric, stitched with a colourful soundtrack (countryside sounds aplenty and songs by, in particular, Brel and Ferré, with an original soundtrack composed by Philippe Katerine), offers further proof of the artistry of the Larrieu brothers. Almost imperceptibly, they convey the subtle psychological changes undergone by their characters by varying their shots of them (e.g., during the four dinners around which the film is based). A highly professional piece of work in which they do not for a second recoil from the challenge of filming a scene several minutes long that takes place in total darkness with only the soundtrack as background. Henceforth proven masters of mixing colours from their film-maker’s palette, the Larrieu brothers, accomplished artisans that they are, are ready for the masterpieces that lie in waiting.

more about: To Paint or Make Love

Numerous purchasers for a 100% French production

"A Difficult Film to Finance"

For Les Films Pelléas, the producer of the last three films of the Larrieu brothers, an expression of loyalty

To paint or to make love

Daniel Auteuil and Sabine Azema tempted by forbidden apple in Swingers’ paradise. The latest demonstration of the subtle, far-reaching talent of the Larrieu brothers

The cast features Félix Moati, Nils Othenin-Girard, Mélanie Bernier, Audrey Lamy and Philippe Rebbot in this Mona Films production being sold by Be For Film

21 Nights with Pattie: A hidden source and macabre farce 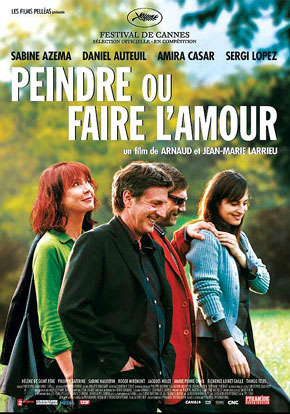