28/09/2005 - When Haneke turns the screen into a mirror of the conscience, does this mean he accepts what he has always denied: the possibility of a genealogy of crime?

This psychological drama is disturbing from the very outset: the first, excruciatingly long take, which seems to present the setting, is not an image of reality but the excerpt of a two-hour long videotape showing the front of the suburban house of Anne (Juliette Binoche), a publisher, and her husband George (Daniel Auteuil), who presents a literary programme on television. This bourgeois couple and their teenage son are in fact harassed by an amateur videomaker who sneaks into their life and doubly violates their intimacy, first by filming them, secondly by obliging them to watch the tapes he sends every day, wrapped in a sordid child's drawing. This presence, or rather, this ghostly absence of the 'hidden' voyeur whose identity remains a mystery up to the end, contributes to the claustrophobic atmosphere of the movie: here the self-reflexivity is complete and the victims of this awful game are forced to turn their gazes inwards and explore the darkest regions of their own consciences.
The malevolent videomaker gradually changes focus, orienting the camera towards a farmyard from Georges' childhood. A scene buried in the past (that is, 'hidden') ressurfaces and reopens an old wound full of the innocent blood shed during the Algerian war. The revenge of the abandoned child does not consist in having George suffer back, but in making him the witness of the betrayed orphan's pain and of his last impressively bloody act. Later, when Georges receives a videotape of himself helplessly watching this man commit suicide, the nightmare is amplified by the multiplication of the screens which separate him from reality. Michael Haneke had never emphasized so much the position not of actor but of mere passive spectator of violence. Although he does not play on the vertigo of voyeurism mis en abyme as much as his fellow-countryman Markus Heltschl does in Dead Man's Memories (Der gläserne Blick), Haneke also incriminates he who is watching. Very much in the manner of Beaudelaire's 'self-torturer', the spectator of violence, even if he suffers from it, is as guilty as the perpetrator.

Unlike in his other films, here, Haneke seems to provide the logical explanation he denied us in Funny Games (through Tom's ironic comments of all the possible reasons for his cruelty). In Hidden [+see also:
trailer
interview: Margaret Menegoz
interview: Michael Haneke
film profile], a traumatic episode of the character's childhood is supposed to justify it all. Is Haneke finally yielding to the law of causality? This being said, the disproportionate revenge is hardly plausible (even if Auteuil symbolically bears the guilt for all the suffering imposed on the Algerian people by the French) and does not make the identity of the anonymous videomaker any clearer. The frontier between the real and the reel, that is, between reality and its filmed representations, is too blurry for any of them to make sense. The final scene is over-enigmatic and the dialogues sound artificial —besides the tension full of silent antagonisms which usually characterizes Haneke's dialogues, the familiarity of the Parisian couple's verbal exchanges is so marked that it sounds discordant and fake. The director definitely leaves the spectator profoundly unsatisfied, thereby achieving what he openly admits to be his main purpose: never making violence a consumer good.

"Loyal to a great author"

"...profoundly unsettling and superbly filmed, punching home a stiletto-stab of fear. (...) The performances from Auteuil and Juliette Binoche as his wife are outstanding, and Haneke's icy...

When Haneke turns the screen into a mirror of the conscience, does this mean he accepts what he has always denied: the possibility of a genealogy of crime?

Could it be a Happy End for Austria in Hollywood?

For the sixth time, Austria has put forward a Michael Haneke film for the nominations for the Oscar for Best Foreign-language Film

Happy End: A step back for Michael Haneke

CANNES 2017: After winning two Palmes d’Or, the Austrian filmmaker is back, in a somewhat icy setting, to working with the more familiar themes of his films before The White Ribbon 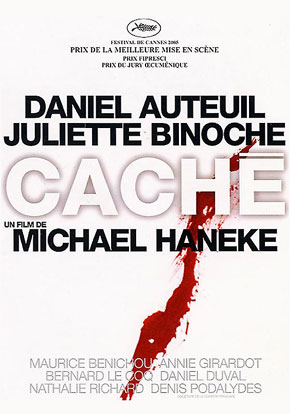