14/10/2005 - A study of guilt in a nightmarish Mexico. A European production for a gifted and disturbing filmmaker

Cannes Film Festival, May, 15, 2005. The salle Buñuel is over-crowded for the press screening of a film in official competition. The film that creates such a craze? Battle In Heaven [+see also:
trailer
interview: Carlos Reygadas
interview: Jean Labadie
film profile], the second feature film by Carlos Reygadas, a young Mexican filmmaker previously awarded in Cannes 2002 with a Special mention from the jury of the Camera d’or for his directorial debut Japón. And at the end of the screening, the same turmoil was still alive as the media started to wave the red flag of scandal, split between those in favour or against the filmmaker in a typical Cannes controversy. But far from the festival shock wave emerges an obviousness: Carlos Reygadas’ filmmaking touches everyone, and very few directors of his generation can boast such a sensational start on the biggest stage of world cinema. His original filmmaking was not left unnoticed by talent sniffers in Europe as Battle In The Sky is a majority European co-production produced by the French Société Parisienne de Production / The Coproduction Office, with the Belgian Tarantula, the German Essential, Arte France Cinéma and ZDF/Arte as co-producers, and support from Hubert Bals Fund, Fonds Sud Cinéma and the Communauté Française de Belgique. Those were the good fairies that leaned over the crib of the gifted and disturbing Carlos Reygadas.

Sociological realim, enigmatic storyline and breathtaking psychological dive in the depths of human soul are the backstone of Battle In The Sky. Choosing to use an unconventional way to treat a classic subject matter (kidnapping), the filmmaker follows Marcos (Marcos Hernandez), the author of the kidnapping that ends dramatically as the child (from poor neighbours) is shown dying right at the beginning of the film. While examining the moral consequences of the misdeed, Carlos Reygadas portrays Mexico, eaten away by the seduction of money and mesmerized by mass rituals from football to religion. Unable to rid of his guilt, Marcos the driver and handyman cannot find any support neither from his surroundings, his wife and confidente or from the beautiful Ana (Anapola Mushkadiz), a girl from the upper-class who makes extra pocket money through prostution in a luxury brothel. Marcos takes refuge in his inner being and starts falling into madness that will eventually lead him to murder, mystical delirium and sudden death. Carlos Reygadas makes no concession in depicting this violent storyline and manages to retranscribe the monotonous daily life of his main character, as well as the sudden invasion of external influences (scenes of social and urban violence, very suggestive musical scores…) and the importance of sex as a way to relax. Three sex scenes in particular were much talked about by the press and can be quite disturbing for the regular cinemagoer used to glamour in film because of the obvious ugliness of the heavy Marcos and his obese wife, while Ana’s beauty introduces a Beauty And The Beast element. The elastic morality of the characters erases the most classic references to the point of turning them into mere human beings completely lost in a society that eats them up beyond good and evil. Carlos Reygadas also manages to film beautifully the total loss of individual values twined by a frantic quest for a saving transcendency, using documentary-like images then close-ups similar to paintings, as close as possible to the skin. Using all technical device available, the filmmaker experiments all the range of film language, developing his own style and drawing a coherent patchwork that will only continue to improve with time.

more about: Battle in Heaven

Key figures for Battle In Heaven

Production: The €1,66M film Battle In Heaven a was produced at 29% by France, 26 % by Germany, 25% by Mexico and 20% by Belgium. Produced by Philippe Bober for Société Parisienne de Production /...

"A major filmmaker for the years to come"

A study of guilt in a nightmarish Mexico. A European production for a gifted and disturbing filmmaker

Following Toto the Hero in 1991, the Belgian filmmaker is making his big comeback to the section that kicked off his career, with The Brand New Testament

A Spanish Tree sprouts in Rotterdam 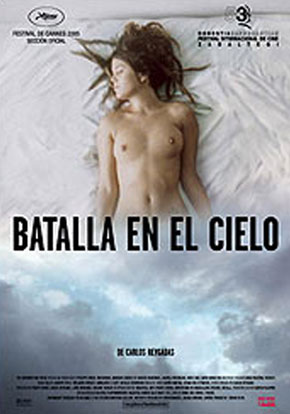