Positioning and launching of the film
Nordisk Film International Sales (NFIS) started working on Adam’s Apples right after its Danish release in April 2005. “Dark comedy films like Anders Thomas Jensen’s The Green Butchers and Adam’s Apples are better if seen on a big screen with an audience, and too cold to be seen alone on DVD”, says Susan Wendt, sales executive. NFIS needed a major festival to platform the film and Cannes in May was the obvious first A festival where to premiere it to potential international buyers. But the challenge for NFIS was then to sell the film without the hoped for festival selection which could have helped raise its position and profile in a highly competitive environment where hundreds of films are screened every day over a 12-day period. So the film ended up being launched at the market. What were then the marketing hooks on the film that NFIS could use to attract potential buyers attention?

-Local hit
The success of a film in its domestic territory is among the key elements to attract buyers attention and as stressed by Susan Wendt, “after the opening weekend of a film, and after buyers have had a chance to look at box office/admission figures in the trade publications, they often contact us to get more information if a film opens strongly”. Adam’s Apples had been released five weeks before Cannes and had already reached 300,000 admissions.

- Anders Thomas Jensen. Director and scriptwriter
The Green Butchers, the previous film scripted and directed by Anders Thomas was a festival hit in 2003 and had sold very well internationally, so buyers had an idea of Thomas Jensen’s personal style, vision and dark humour, making him an exciting new Danish auteur to follow. Plus as a scriptwriter, his name is associated to many critically-acclaimed Danish films such as the Dogme films Mifune, The King Is Alive and Open Hearts, as well as Wilbur Wants to Kill Himself [+see also:
trailer
film profile], Skagerrak and Brothers.
The filmmaker has also been nominated three years in a row for his short films Ernst & The Light in 1996, co-directed with Thomas Villum Jensen, Wolfgang in 1997, and his 1998 nominated short film Election Night actually won an Oscar.

-Cast
Mads Mikkelsen and Paprika Steen had both starred in Susanne Bier’s celebrated Open Hearts and Ulrich Thomas was in Bier’s other festival hit Brothers. 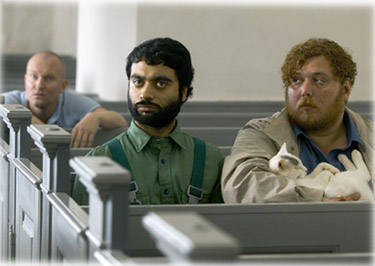 Sales closed during Cannes
All the major distributors attended the market screenings of Adam’s Apples in Cannes, and the territories that bought the film include Italy (Teodora Film), Poland (Kino Swiat), Thailand and Malaysia (Pacific). The sales input started again when the film was selected at the Toronto Film Festival in the Contemporary World Cinema section and as the Danish entry for an Oscar nomination in the Best Foreign Language Film category.

Toronto 2005 and post-Toronto festival strategy
Adam’s Apples was very well received during Toronto where it had one gala screening and 3-4 public screenings. The film was sold there to Brazil (Broadway Filmes) and Portugal (New Age Entertainment). Serious negotiations started with France and German speaking territories which were finally closed after the AFM with Europacorp for France who had previously released The Green Butchers, and Delphi Filmverleih who bought it for Germany, Austria and Switzerland.

After Toronto, the film screened at several smaller international festivals during the autumn, including Hamburg, Sao Paolo Reykjavik and Warsaw where it won Audience Awards. As stressed by Susan Wendt, those smaller festivals are often very important as they can sometimes entice local distributors to buy a film particularly well-received by the local audience. Such was the case of Adam’s Apples in Poland which was bought by New Age Entertainment during Mipcom just after it had won the Audience Award at the Warsaw International Film Festival a few days earlier.

Marketing materials for international distributors
As part of the vertically-integrated media giant Nordisk Film, the sales arm was able to work at a very early stage with the theatrical distribution, video/DVD divisions of Nordisk Film and production company M&M on the making of the marketing tools.
Usually NFIS provides its international distributors with the local artwork and stills, the English script as well as certain materials such as the digi-beta of the film as a loan. The bigger territories get the films’ inter-negative in loan so that they can produce their own print.
The making of prints are in fact quite expensive in Scandinavia, more than in the rest of the EU, so for some of their films, NFIS place an inter-negative in Germany where costs are lower than in Denmark and international distributors then have the possibility to acquire the print from there to try to lower their potential print costs.
In terms of artwork, if they want to change the original image, they can make their own and recoup the costs.

At press time, Adam’s Apples was only starting its international distribution.