An air of nostalgia reigned yesterday afternoon in Un Certain Regard with Patrick Grandperret’s Murderers [+see also:
trailer
film profile], a film based on an original idea by Maurice Pialat (winner of the Golden Palm at Cannes in 1987).

In fact, Sylvie Pialat, the wife of the French director who passed way in 2003, produced the film with her production outfit Les Films du Worso. She then entrusted the project to Grandperret, who started out as Maurice Pialat's assistant. The story was inspired by a real-life event and centres around two young girls who plotted death in the surroundings of La Rochelle.

Concentrating on what preceded the first murder committed by Nina (Hande Kodja) and Lizzy (Céline Salette), Grandperret first recounts the paths leading up to their fortuitous meeting in a psychiatric hospital. The first has to cope with the burden of her father's death, struck by a heart attack while having an argument, while the second girl wants to commit suicide.

Upon escaping from the mental hospital, the two women roam about for a few days, broke and searching for a place where they can just take a shower. They find themselves at the mercy of the various characters they encounter, in particular men wanting to exploit their weak situation.

Toughened and made accomplices by the adversity of a world that seems to reject them, they turn to murder in an attempt to defend themselves against rape. What initially seems like a rock and roll adventure to them (sleeping on the beach, breaking into a house, flirting with the idea of becoming prostitutes, dreaming of faraway places) ends in blood on a road in the middle of the night.

The €2.21m Murderers received a €410,000 advance on receipts from the CNC, co-production funding from StudioCanal and Emaël Films, a pre-sales agreement from Canal+ and Ciné Cinéma, as well as funding from Sofica EuropaCorp. Sold internationally by Wild Bunch, the film will be released in France on June 28 by Pan Européenne.

Seven feature film screenplays were selected in December by the second advance on receipts committee of the National Film and Moving Image Centre (CNC). Among them is L’enfant D’en Haut (“The...

Absent from screens since The Girl from the Chartreuse (2005), Jean-Pierre Denis will start shooting his sixth feature, Here Below, on October 4 in Dordogne. The film is based on the true story of...

Shooting starts today in Saint-Rémy-lès-Chevreuse, near Paris, on Bertrand Bonello’s fifth feature: L’Apollonide. The director of Tiresia (in competition at Cannes in 2003), On War (Directors’...

A 20-year-old girl, who has grown up too quickly and seeks in the arms of older men a replacement for her prematurely deceased father, and a woman who no longer knows how to love are at the heart...

For the third consecutive year, the Ile-de-France and Madrid Film Commissions are hosting a co-production meeting today at the San Sebastian Film Festival. Over 40 film projects will be presented....

Three weeks after its Berlin screening, Olivier Dahan’s La Vie en Rose will open the 12th Rendez-Vous With French Cinema Today at New York’s Alice Tully Hall on Wednesday, in the presence of the...

Inactive for over 20 years, the film co-production agreement signed in 1965 between France and Sweden was reactivated this year for the production of Capitaine Achab by Philippe Ramos, shooting of...

After his striking Cash Truck (2004), Nicolas Boukhrief is to begin principal photography on his fourth feature, Cortex (working title) in the Ile de France on November 9. Produced by Sylvie... 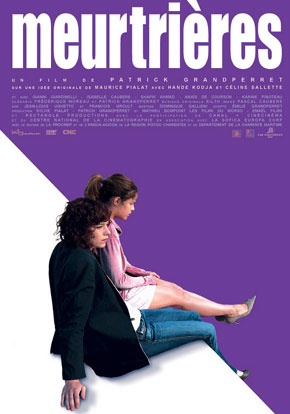