Michel Ocelot’s new animated film, Azur et Asmar [+see also:
trailer
film profile], received a standing ovation this afternoon at its screening in the Directors’ Fortnight. The film’s magic enchanted the 250 children invited to the screening, as well as the adults present in the packed theatre.

In keeping with the spirit of the opening of his famous Kirikou, this time around the French director chose to make a film about the similarities between European and Arabic cultures, illustrated by the mishaps of blond-haired and blue-eyed Azur, son of a lord, and Asmar, the black-eyed North African son of Azur’s nanny, who equally loves the two boys she raises together in France ("their blood has the same colour").

Separated after childhood, the two heroes come face to face as rivals on the other side of the Mediterranean sea when on a legendary quest to find and marry the genie fairy. There is no lack of adventure during this voyage marked by racial prejudice and hateful superstition, which features drowning, keys and magic doors, thieves and slave traders, princesses and wise men, mythological guardians (such as the Scarlet Lion and the Multicoloured Bird), Dark Caves and the Hall of Light and the filter of invisibility. Ocelot offers us a true fairytale inspired by the great tradition of symbolic animation in Karl Zeeman’s Jason and the Argonauts.

While the film is well-paced and entertaining, and of anti-racist educational value for young generations (characters speak and sing in French and Arabic), Ocelot literally outdoes himself in terms of animated graphics. An enchanting display of colours worthy of the finest pages from A Thousand And One Nights, Azur et Asmar unveils a fabulous reservoir of ideas: from Chinese shadow figures to the geometric black-and-white architecture of the palace, to a ballet of fireflies circling the genies. Everything comes together to create a masterpiece and prove that French animation is currently experiencing a kind of golden age.

Sold internationally by Wild Bunch, the film also received an advance on receipts of €350,000 from the CNC, for a total budget of €9.4m.

The Prix EURIMAGES will be presented during the European Film Awards Ceremony in Berlin on Saturday, 12 December 2015

Produced by Nord-Ouest and Studio O, the next animated movie by Michel Ocelot will be co-produced by the film arm of the Franco-German channel

“Fairytales are my language”

Animation, stereoscopic 3D, the world of fairytales and the storyteller’s philosophy: in Berlin, the French director reveals the ingredients for Tales of the Night. 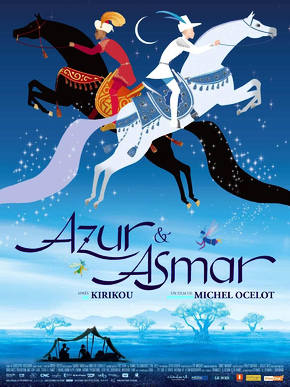