What Makes You Happy

20/09/2006 - A film within a film produced with dreams that become means. The film marks the return of an audacious director for whom filmmaking has become as essential as living

There is one scene in What Makes You Happy [+see also:
trailer
interview: Fabrizio Rongione
interview: Joachim Lafosse
film profile] where Kris Cuppens’ character complains about Joachim, Fabrice rather, who decides to "bring together" all the little stories of his life in his new film: difficulties of being a trained director but jobless, Brussels as a place of solidarity between French and Flemish speakers, the failure of a relationship, the beginning of a new love, and the desire (greater than common sense) of making a new film. All these fragments of stories meet and blend with each other ironically in a film, which – dangerously perhaps – invades the private lives of those who volunteer in the making of the film. And what is the reason behind this? Putting aside the hypothesis of therapy – which Fabrice, the director in the film, emphathically denies in front of his cast and crew – we never stop asking ourselves if it is art that imitates life or life that imitates art.

What Makes You Happy arouses curiosity about the barriers between reality and fiction, but does not allow room for the temptation to reply. Here lies its delightfully manipulating element. Lafosse seems to have found pleasure in confusing the issue, by expressing pleasure with much humour. This choice is rather unexpected, at least for those who had seen his previous feature, Private Madness (whose poster appears more than once on screen in What Makes You Happy). While in Private Madness a nervous directing style seemed to condemn all characters from the outset, in What Makes You Happy bright hope prevails. There is a gentle aspect to the directing, which always withstands the most tense and hysterical moments in the story. Out of fear, we renew the belief that the making of a film should not be and cannot be stopped. It is clear that for Joachim and his (false) alter ego Fabrice and their respective casts, the end justifies the means. We end up believing this too.

We are happy too with the acting, especially Rongione, who authentically depicts the contradictions of a director in search of his art and himself, and the marvellous Catherine Salée, oscillating permanently between anger and disbelief. Even Mariet, the young Flemish waitress, who swears to have never acted before (yet plays one of the lead roles in the film), gets along very well by pretending not knowing how to act (does she really know how to?). The scene on the set that puts the director in opposition to the rest of his cast and that culminates with the expulsion of the "actress" is one of the most successful in the film. There is a firm balance between the irony of the situation and the devastating consequences that such a decision could have for a film. But perhaps nothing is more devastating than the void of inactivity, so a new solution is found.

Mariet leaves the cast but does not disappear from the story. She features in the film’s closing shot, which – like a final clue that we saw coming – What Makes You Happy, a film within a film, is also a love story. However, the love is unrealised. Contrary to other stories in the film, exploited with little modesty, the relationship between Fabrizio and Mariet remains in the realm of suggestion, but we feel trapped somewhere between the fantasy that fuels it and the violent confrontation of its own limits. The real, successful love story of the film is that of a director and his art and his ability to inspire love from his team and audience.

more about: What Makes You Happy

What Makes You Happy

A film within a film produced with dreams that become means. The film marks the return of an audacious director for whom filmmaking has become as essential as living

"Truth exists so we can make the best of it"

Much of the success of Joachim Lafosse’s film can be credited to its lead actor Fabrizio Rongione, who lends his character an eccentric and radiant grace

This desire of making a film

Between two more serious films, the young Belgian director this time gets behind the camera to recount the trials and tribulations of his art, but above all to laugh about them

The Belgian screenwriter and director is filming his first feature, starring Johan Leysen and Gilles de Schryver, and produced by Fobic Films

Over two years ago, Cinéastes Associés embarked on the exciting but perilous adventure of making low-budget films. This initiative stems from a double movement that is both international (like the...

The Film and Audiovisual Centre of the French Community of Belgium granted funding to 25 projects, including nine features, at its first committee session in 2008. Eklektik Productions will thus... 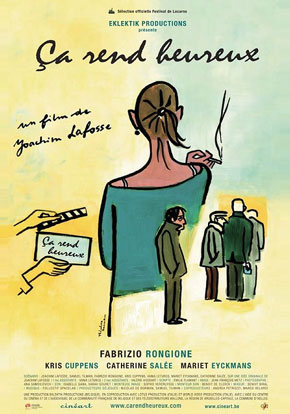