20/09/2006 - An epic action and award-winning film at Cannes, which unveils a little-known period of World War II, that of the participation of North African infantrymen in the liberation of France and Italy

When on stage at the Grand Théâtre Lumière and under the eye of the cameras at the Cannes Film Festival last May, Days of Glory [+see also:
trailer
interview: Jean Bréhat
interview: Rachid Bouchareb
film profile]’s male cast (collectively awarded Best Actor at the festival) launched into a rendition of the French colonial army anthem "C'est nous les Africains" (“We are the Africans”), director Rachid Bouchareb had good reason to be proud of his victorious troops at the end of a what was not only a cinematic, but also a political and social adventure. An unrelenting explorer of confrontations between communities in his four previous features (including Cheb, screened in a Cannes sidebar in 1991 and winner of awards at Locarno; Dust of Life, nominated for a Best Foreign Language Oscars in 1996; and Little Senegal, in competition at the 2001 Berlin Film Festival), with Days of Glory the French-Algerian director brings out into the open a largely ignored historical event, that of the active participation of North African infantrymen in the 1944-1945 Liberation of France and Italy from Nazism and Fascism. The end result is a moving war epic, starring a quintet of remarkable actors (Jamel Debbouze, Roschdy Zem, Sami Bouajila, Samy Nacéri and Bernard Blancan) and directed by Bouchareb who has been shortlisted as Algerian candidate (thanks to his double French-Algerian nationality) in the 2007 Oscar nominations for Best Foreign Language Film.

United in 1943 by the international conflict that sought volunteers even in the most distant villages, Saïd, an illiterate (Jamel Debbouze); Messaoud, a sentimental marksman (Roschdy Zem); Abdelkader, an ambitious justice-loving corporal (Sami Bouajila); and Yacir, a savage looter turned soldier (Samy Nacéri) are trained as soldiers by sergeant Martinez (Bernard Blancan). Crossing the Mediterranean they find themselves at war again in Monte Cassino (Italy) the following year. They then follow the festive liberation of Marseille in August 1944, before being sent to the Rhône valley, the snow-capped Vosges and finally Alsace. A trail of death and intimate moments of military life gradually lead the main characters to the realisation that not even uniforms can mask racial inequality ("Arabs aren’t made to give orders"), a far cry from the French slogan of "Liberty, Equality, Fraternity".

A story of men and a melodramatic action film, Bouchareb’s work follows in the classical cinematic tradition and successfully combines historical accuracy with moments of powerful fictional intensity. Reaching its peak in the last half hour, the film proves to be an homage to these little-known war heroes, while also contributing to lively debates on the topical themes of immigration and integration in French society, an approach reminiscent of Glory by US director Edward Zwick. This similarity has also not escaped the Weinstein Company who will release Days of Glory with IFC Films in North America.

A French/Moroccan/Algerian/Belgian co-production headed by French outfit Tessalit Productions (created and directed by Jean Bréhat and Bouchareb), Days of Glory brings its director a step further along the path to fame. Attention he more than deserves and which should help his upcoming projects, a film on Bob Marley and a sequel to Days of Glory featuring the same actors, who will this time take on the Indochina and Algerian wars (see news). He will be producing the film with his company 3B Productions who are regular producers of films by such artistically uncompromising directors as Bruno Dumont.

more about: Days of Glory

After the warmly received first screening at the Cannes Film Festival, the four lead actors of Rachid Bouchareb’s Days of Glory had no idea that three days later they would receive a collective...

Co-founder of the production company 3B Productions with Rachid Bouchareb in the late 1980s, he has always produced projects by his partner-director

"Cinema is a crazy business"

Meeting with a committed and humanist director, who has unveiled with much talent an ignored period of French history

An epic action and award-winning film at Cannes, which unveils a little-known period of World War II, that of the participation of North African infantrymen in the liberation of France and Italy 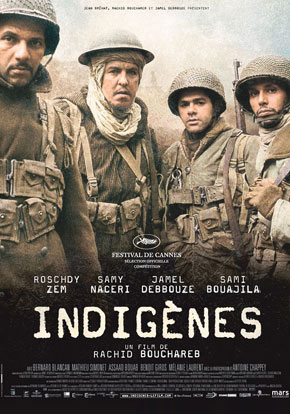