The Lives of Others

A man with a blank stare steps into a lift in an anonymous high rise in 1984 East Berlin. Just before the doors close, a football bounces in, followed by its young owner. The doors close. The lift starts moving. The little boy looks up to the man and asks: "Is it true you work for the Stasi?" The man snaps back, like the expert interrogator the audience has come to know him as: "Says who?" to which the young boy answers: "My father". Not missing a beat, the man continues: "So, what is the name of..." before stopping mid-sentence. "Of what?" the boy wants to know. A few seconds of silence. "Of your football?" the man asks with incredulity in his voice, as if he cannot quite believe those words just left his mouth. "You’re crazy!" the boy says, "Footballs don’t have names!"

This small gem of a scene, not even two minutes long, is a first indication of cracks appearing in the outer veneer of a much-respected Stasi captain, a staunch defender and teacher of state spying in East Germany, several years before the fall of the Berlin Wall. The Lives of Others [+see also:
trailer
interview: Florian Henckel von Donners…
interview: Ulrich Muehe
film profile], from debut writer-director Florian Henckel von Donnersmarck tells the fictive story of this man, Hauptmann Gerd Wiesler (Ulrich Mühe). It is a film that foregoes all the pyrotechnics of flashy thrillers and high-strung spy mysteries for something that gets under the skin. It is the type of highly intelligent character drama that passes through the brain before reaching the heart.

Wiesler is assigned – at least partially by his own doing – to literally keep an eye and an ear on celebrated playwright Georg Dreyman (Sebastian Koch, the Nazi Officer in Black Book) and his live-in girlfriend, lauded actress Christa-Maria Sieland (Martina Gedeck, Mostly Martha). Their bohemian existence seems to somehow fit with the party line and Wiesler cannot uncover any blemishes, until an incident involving Dreyman’s playwright friend Jerska (Volkmar Kleinert) will change both Dreyman and the man who follows his every move.

Technically, the film is polished and avoids the fixed-camera Big Brother aesthetic by softly gliding through the rooms to the notes of Gabriel Yared’s low-key but effective score. The beauty of Henckel von Donnersmarck’s script and direction is that he trusts the audience to pick up on the small changes and motivations in his characters, even if they are apparently inexplicable. The first time Wiesler realises that something dubitable is going on in the Dreyman household, he acts on an impulse and censors it from his daily report. This small action will snowball through the rest of the lives of all of the characters, not only his own, but also that of Dreyman, and, more tragically, Sieland’s. It is unlikely that he would have allowed such a slip-up had he known beforehand where it would lead, but in that split-second of decision-making, he has sealed his fate for years to come (an unsentimental epilogue set after the fall of the Berlin Wall will show how everyone’s lives have been affected by each other’s actions).

The film is long but the rhythm never flags; the script is full of subtle mirror effects and references, and its themes only gradually surface, again trusting the audience with the material. One of the major themes is of course the play-acting metaphor: Sieland and Dreyman are in the business of make-believe, while Wiesler is on the opposite end of the spectrum, trying to find out the real feelings and intentions behind people’s public masks. In a police state, everyone is aware that a certain level of acting is necessary when in public, if only to avoid drawing attention to one self that might invite further scrutiny. Henckel von Donnersmarck’s film on the other hand is a work that can easily bear multiple viewings and an investigation of its characters and motives. In fact, it is exactly this denseness of storytelling that the rookie filmmaker carries of with such light grace that makes The Lives of Others compelling.

more about: The Lives of Others

A man of stature

He is a debutant who has proven himself a professional in the best sense of the word with his first feature, aesthetically consistent, moving, great narrative cinema from a youngster

Versatility is his middle name

Whenever conversation turns to the actor Ulrich Muehe, one inevitably hears the word "versatile" being used to describe his skill in being able to change effortlessly from one kind of role to the next

The Lives of Others

In collaboration with German Films Quarterly

The road movie is an adaptation of the best-selling novel by German author and musician Thees Uhlmann, toplined by Anna Maria Mühe, Marc Hosemann and Dimitrij Schaad

“I tried to find the politics from within the characters”

VENICE 2018: Florian Henckel von Donnersmarck follows up his 2010 adventure into American filmmaking with Never Look Away, a historical drama inspired by the life of Gerhard Richter

VENICE 2018: Florian Henckel Von Donnersmarck returns with a film inspired by the life of the German artist Gerhard Richter, aimed at an audience born after the fall of the Berlin Wall 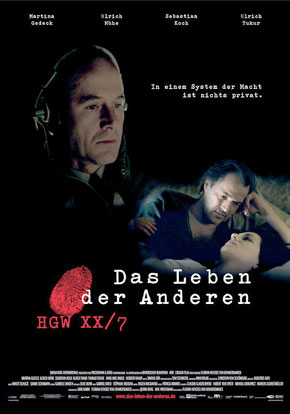