In writing about this surprising debut – which had its baptism by fire at the Directors’ Fortnight of the 2006 Cannes Film Festival – several Italian and French critics have made references to Francois Truffaut (see press review in this Focus). It may well be that French audiences will recognise in the Italian film, opening today in MK2 cinemas, something of their own cinema, of those films that lie somewhere between Truffaut’s The 400 Blows and Small Change and Maurice Pialat’s Naked Childhood.

The French recently got to know Kim Rossi Stuart’s attractive and restless face in Crime Novel [+see also:
film review
trailer
interview: Michele Placido
film profile], but did not suspect he had talents as a screenwriter and director. Nor did Italians. Yet even if we speak of a surprising debut, we have nevertheless come to esteem this actor who has consistently refused an easy career built on his looks, to transform himself into a sensitive, Shakespearean theatre actor (King Lear with Luca Ronconi, as well as Hamlet and Macbeth).

Rossi Stuart began his film career at the age of five, in a small role alongside Catherine Denevue and Giancarlo Gianni in Mauro Bolognini’s Drama of the Rich, and has more recently appeared as the young psychopath in Alessandro D'Alatri’s No Skin, as Lucignolo in Roberto Benigni’s Pinocchio, as a reconciled father in The House Keyes by mentor Gianni Amelio, and as the criminal with a tender heart in Crime Novel. All roles chosen with care and taken on with a profound respect for his craft.

Despite his reputation as an actor, it was still permissible to be pleasantly struck by Rossi Stuart the director and by a debut film that – without taking Truffaut’s name in vain – marks the birth of a new filmmaking talent and which Rossi Stuart infused with all of the nervous emotionality of his performance.

Written by Rossi Stuart with Linda Ferri, Federico Starnone and Francesco Giammusso, Along the Ridge [+see also:
trailer
interview: Kim Rossi Stuart
film profile] is a drama that delves into the broken lives of a family in Rome: Renato (Rossi Stuart) is a cameraman with unrealistic projects, perpetually fighting against the world as he struggles to raise two children on a meagre salary, while his wife (Barbora Bobulova), torn between her nature as a free spirit and her maternal responsibilities, disappears for months to return and break their hearts all over again.

Leaving the female characters in the margins, the film centres on the relationship between the aggressive and fragile young father with a menacing and often unpleasant personality, and his 11 year-old son Tommi, whose sad, sweet eyes painfully endure and observe the neurotic convulsions of a generation eternally battling with itself.

What strikes the hearts of spectators is precisely the credibility of Alessandro Morace, whom the director discovered in a school in the suburbs of Rome. Father and son are each enshrouded in a similar kind of solitude: Renato pushes his son towards self-isolation and the athletic rigours of swimming while Tommi wants to enter the fray of life, dreaming about a group sport such as football (thus explaining the meaning of the Italian title Anche libero va bene : even the position of “libero”, or sweeper, in football is fine). Life’s hardships and the struggles of growing up are metaphorically expressed when Tommi walks along the edge of the roof of the house, savouring the dizzying abyss.

Without passing moral judgment, the film points to a future existence that is taking shape. De Sica and Truffaut may be sources of inspiration, but Rossi Stuart searches for an authentic linguistic independence that makes no compromises, at the limits of decency. His directing is not based on artifice; its tones are harsh and energetic, yet his insecurity as a debut filmmaker is nevertheless revealed in his total reliance on the script, which leaves little room for the nuances of gestures and gazes.

more about: Along the Ridge

Hollywood Reporter Italian directors have lately made a specialty of well-crafted, emotionally intense family dramas, and Kim Rossi Stuart keeps up the good work in his directorial debut. Anche...

"As truthful as possible"

This third title by director and actor Kim Rossi Stuart is a covertly spiritual film revolving around a father-son relationship, disguised as an unaccommodating existential western 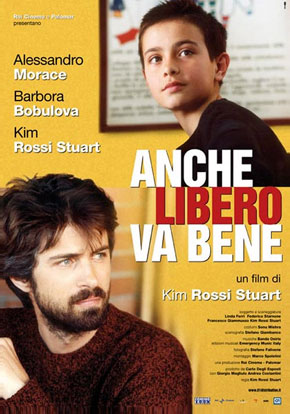