05/12/2006 - Jasmila Zbanic's directorial debut is not a typical film about war, but rather a story about the devastating emotional consequences of it and the way to escape from them

It is a film about the war that continues beyond the peace process; about the personal and silent conflict in trying to forgot the unforgettable and deny what – for healing purposes – should have been said aloud. While the theme of the systematic torture and rape of women during the 1990's Balkan war had also been approached in Isabel Coixet's melodrama The Secret Life of Words [+see also:
film review
trailer
interview: Isabel Coixet
film profile], here, instead of contextualizing the issue in a cathartic love story between a man and a woman, Zbanic opts for a stronger female-driven trans-generational tale, which is also a portrait of post-war Bosnian society.

The opening sequence of Esma's Secret slowly scans the faces of several Bosnian women who we later learn are part of a group counselling session. At a certain point, the camera stands still on Esma's face. It becomes clear then that Esma's story – her secret – could be shared by many of these women, in whose eyes widely shut one can perceive an incapacity to face a life overshadowed by war traumas.

Avoiding military scenes and bloody portraits of (male) soldiers torn between bravery and vulnerability, Esma's Secret tells the story of a mother doing everything she can to hide from her teenage daughter Sarah that her father was not actually a war martyr. This lie has been maintained plausibly for years but now, in order to get a discount on a school trip, Sarah needs a certificate proving her father was actually a "hero". The entire plot of Esma's Secret is built upon the tense struggle between the two, simultaneously showing Sarah's rising suspicions and Esma's desperate attempts to hide the truth. The conflict progressively reaches its climax with Sarah pointing a gun at her mother that, paradoxically, had belonged to a real war martyr.

Experienced actress Mirjana Karanovic – who has appeared in several of Emir Kusturica's films – offers us a disturbing performance that has already been awarded at several festivals. She is stuck in feelings of guilt and shame over her past and her love for Sarah (Luna Mijovic) is inevitably overshadowed by contradictory circumstances. As a mother, Esma is expected to unconditionally love her daughter, and she does, but what does it mean to love unconditionally when at the very root of the relationship lies a traumatic experience? Some domestic sequences mix violence and tears with hard silences and even harder revelations, which could have easily become a trap for overly sentimental performances, yet the two actresses succeed in never compromising the film’s overall realistic tone.

Realism can also be perceived beyond the household, as if a family melodrama opens a path towards a broader look at post-war Bosnia. Sarajevo's streets, schools and bars are filmed without glamour, with the camera capturing the scars of the city's neighbourhoods. The daily life of the locals is tough as well: people are obliged to have more than one job in order to balance their income; jobs for which they are, most of the time, overqualified. Esma, who studied medicine, currently works in a shoe factory and in a nightclub. Although she does not complain, it becomes clear that such a spirit of sacrifice isn't particularly shared by other male supporting characters, whose determination to survive under hard financial conditions isn't – as in Esma's case – backed by abnegated filial love.

Zbanic films this legacy of destruction and transfers it to the dialogues of both the elder and younger generations, who constantly seem haunted by the dead. For those who have rebuilt their lives upon disappointment and shame, truth seems to be the path towards regeneration. However, it is up to the young "orphaned" to lead the wider process of hope. To love the child of wartime rape is, after all, to love a young generation. That is the secret beyond Esma's secret.

The importance of being earnest

Besides her work as a director, Barbara Albert is also a committed producer...

"Love and war in Sarajevo"

"My film is not only about war, it is first and foremost about love, about a love that is not pure because it is mixed with hatred, disgust and desperation"

Jasmila Zbanic's directorial debut is not a typical film about war, but rather a story about the devastating emotional consequences of it and the way to escape from them

VENICE 2020: There is no time to catch one’s breath in Jasmila Žbanić’s powerful film, closing in on a teacher-turned-translator for the UN in Srebrenica trying to find her way

Review: The Diary of Diana B.

A Good Wife: Questioning the price of a good life 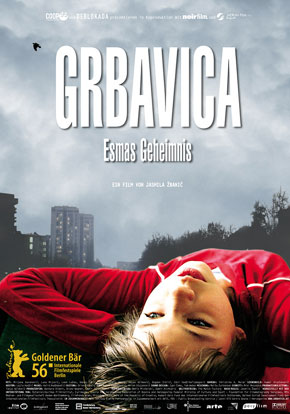