Where? A farm and countryside in the summer sun. When? A few weeks before a tragedy. How? Not explaining anything, not using psychological or sociological explanations, letting the audience free to draw its own conclusions.

In adapting the novel "The Last of the Crazy People" by Canadian author Timothy Findley, French helmer Laurent Achard, winner at the 1999 Rotterdam Film Festival with his debut feature More Than Yesterday, has chosen explosive subject matter for his second film: a family trapped in a web of unhappiness. At the core of the chaotic reality is eleven year-old Martin, who discovered by his headmaster hidden in darkness the night before the holidays, is showing a strange desire to repeat and throws his schoolbag in the river. Forbidden to see his mother, who is a recluse in a room prey to phantoms of madness, the child apparently has to put up with all this without ever breathing a word of the ultra-violent psychological difficulties that are beyond his comprehension. He also finds no comfort from his father who is overwhelmed by events, a grandmother focused on getting by financially (selling the farm), or from his older brother, affectionate but going through an existential (to leave or not?) and a sentimental crisis (against a backdrop of homosexuality in rural France). Everything goes from bad to worse until the fateful end of a journey of distress. Everything has turned dark.

From this challenging script with its concentration of despair and not appealing to the television channels more interested in pre-buying prime-time comedies, Laurent Achard has nevertheless brilliantly succeeded in creating a highly subtle film. Viewed solely throught the eyes of a child, played by Julien Cochelin as moving as he is expressively unfathomable, the narrative is linked together by small details at a calm rhythm, which is intersected by sudden outbursts. Rarely dealing with characters and their acts in an upfront manner, and making intelligent use of off camera and sound (especially for the mother played by the impressive Dominique Reymond), the director creates an atmosphere of eeriness and worry. This exceptional mastery of directing keeps the audience in the dark as to the exact motivations and intentions of the protagonists, which allows the director to dive deep into an adventure to explore the sensitive and complex zones of the human being. Both a realistic portrait of rural France, which has given in, and a classic film that could be compared to a Greek tragedy or a Shakespearian play, Demented [+see also:
trailer
interview: Dominique Barneaud
interview: Laurent Achard
film profile] can be interpreted on several levels, each of which contains discreet metaphors. But this bitter depiction of lack of affection from a microcosm of society that transmits destructive models to the next generation is a film of great power despite its apparent simplicity. The quality of the cast exerces a striking influence in this regard. Special mention goes to Pascal Cervo, who plays the older brother and Fettouma Bouamari, the only established actress in this shadowy universe. An ensemble which won the film the Jean Vigo Award and Best Director at Locarno this year, confirming the indisputable talent of the director. He has produced quite a rare film at a time when subjects and styles are becoming uniformised, but brilliant and disturbing that exists thanks to its producers at Agat Films & Cie (including Robert Guédiguian), relentless defenders of an auteur cinema that is becoming more and more difficult to finance.

Producing without a television pre-sales agreement

Lolita Chammah, Jean Sorel and Virginie Ledoyen will star in the filmmaker’s second feature film, a KinoElektron production that will be distributed by Shellac

Since 1999 and in the space of three feature films, Laurent Achard (pictured) has clearly established himself as one of France’s most talented directors, with the technical quality of his...

The second half of October sees the kicking off of lensing in Paray-le-Monial on Laurent Achard’s third feature Dernière séance (“Last Screening”). Achard’s previous accolades include a Tiger...

Genocide and human madness in The Day God Went Away

Presented in the Panorama of Contemporary World Cinema section at Poland’s Era New Horizons Festival, French/Belgian co-production The Day God Went Away, which looks at the mass murder of Tutsis... 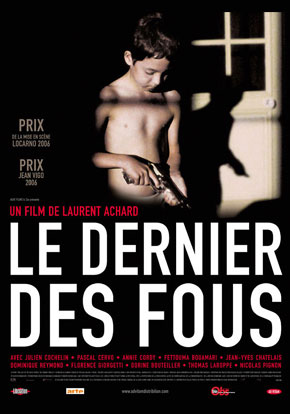