08/01/2007 - In his depiction of a small Romanian town and its inhabitants, Corneliu Porumboiu has made an appealing, farcical, tender, deep and philosophical comedy

The screening of 12:08 East of Bucharest [+see also:
trailer
interview: Corneliu Porumboiu
interview: Daniel Burlac
film profile] at Cannes in Directors’ Fortnight was punctuated by giggles. At the end of the festival, it received the Caméra d'Or, awarded by a jury presided over this year by the Dardenne brothers, and the Europa Cinemas Label Award. Since then, the film has toured several festivals (Karlovy Vary, Toronto, Pusan, Copenhagen - see news), started its European tour (already released in Italy, Hungary, Austria and Norway, and soon on Swedish and Dutch screens) and was selected at the European Films Awards. Its success is an admirable one. With limited financial and technical resources, young Romanian director Corneliu Porumboiu has made a funny and intelligent film, which was one of the projects selected at the Cinéfondation in 2005.

"Revolutions are like lampposts, first they light up in the middle and then they spread to the whole town," comments Pépé Pisconi with a flippant philosophical air. On a makeshift television set, his two incredulous followers – Manescu, a teacher, and Jdrescu, the TV show host (often out of the frame due to an inexperienced cameraman) – are bewildered.

The big question this Christmas Day that the three men are debating is the following is: has the revolution of December 22 1989, the day of the fall of dictator Ceausescu and Communism in Romania happened or not in this small rural town? All eyes are on teacher Manescu in the town hall square before 12:09, the time of the televised broadcast of the dictator’s escape by helicopter and the official time of the fall of the regime. Did or didn’t he take arms before the official announcement of the fall of communism? Did a revolution really take place in this rural town or not? Audiences could not mistake East of Bucharest for a comedy.

Between Manescu, up to his eyes in debt and vodka, Pisconi, with his Father Christmas costume and souvenirs of marriage, and Jdrescu, a journalist, this absurd yet serious question, Porumboiu’s finely directed still shots and miniature scenes paint a contemporary portrait of Romania, full of economic, human and historical ordeals, of an incomplete and deformed memory of events. The closing scenes of the dilapidated lampposts lighting up in the run-down town finally provide an answer to this question, albeit not a very clear one.

A graduate of Budapest’s Universitatea de Arta Teatrala si Cinematografica (UNATC), Porumboiu has directed and produced several shorts, including A Trip to the City, a previous award winner at Cannes in 2004, and Liviu’s Dream [+see also:
trailer
film profile], presented in the Forum sidebar this year at Berlin.

Sold internationally by France’s The Coproduction Office, East of Bucarest was produced for a derisory budget by the director’s company, 42Km Film. The film took only a month to make, had a few sponsors and the usual partners. On the artistic side, the film may also a patchwork, but a successful one.

"My film is on marginalisation, on that which took place in the small towns of my country the day everything changed"

In his depiction of a small Romanian town and its inhabitants, Corneliu Porumboiu has made an appealing, farcical, tender, deep and philosophical comedy

Ten European heritage films are available online, free of charge and in eight languages for students aged 11 - 18 years and for teachers in all member countries of Creative Europe

The upcoming films by Christophe Honoré, Corneliu Porumboiu and Jia Zhangke will also be co-produced by the film arm of the French-German channel

Tikkun, Sparrows, Where There Is Shade and The Open Door also on the list of winners

The CentEast Market reveals a new slate of works in progress 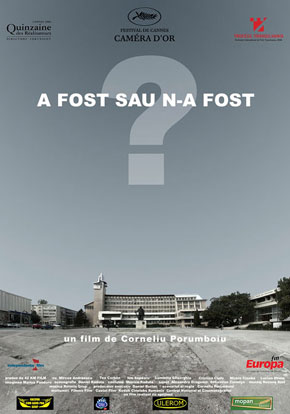