Angel: A fairytale in reverse

François Ozon’s Angel [+see also:
trailer
film profile] – based on a novel by Elizabeth Taylor and the closing film in competition this afternoon at the Berlinale – is a veritable fairytale in reverse set during the Edwardian period.

The film’s heroine, Angel Deverell (Romola Garai), a charming little devil à la Comtesse de Ségur, succeeds right from the beginning – thanks to her blind faith in her innate talent as a writer – in realising her dream of success, buying a grandiose English manor called “Paradise” and promising a handsome young man (Michael Fassbender) eternal love.

Only later does she take on the traits of an old hag in her gothic manor (reminiscent of Miss Havisham in Dickens’ Great Expectations) and realise – albeit too late– that her life was, in fact, only a pipe dream, an in extremis "awakening" – a detail not evoked in Taylor’s novel but one that the director was eager to integrate in the story.

Although in Angel Ozon deals with a theme explored in his previous films (Under the Sand [+see also:
trailer
film profile] and Swimming Pool [+see also:
trailer
film profile]) – where the line between fantasy and reality is blurred (Angel insists with pride on the absence of any literary references in her writing; she bases nothing on reality, preferring to rely solely on her imagination) – he nevertheless ventures into new territory.

As the director explained at the press conference, with each new film he embarks on a new challenge. Indeed, Angel is the director’s first English-language production and is shot in a new setting. "The film’s theme is quite contemporary – just think of reality shows, which promise stardom – but I wanted to try my hand at something completely baroque and rich in detail that wouldn’t be academic but stylised, even if it means not being completely accurate in terms of historical details".

And, unlike Angel, Ozon did draw inspiration from reality, in particular US Hollywood films made by the Europeans in the 40s and 50s. Garai added that she thought a lot about the character of Scarlett O’Hara in preparing her role.

In making his latest film, Ozon collaborated once again with producers Olivier Delbosc and Marc Missonier of Fidélité Films.

Angel will be released in France through Wild Bunch, while world sales are being handled by Celluloid Dreams.

Frantz: Turmoil and turbulence in the looking glass

VENICE 2016: François Ozon has made a masterfully sublime and accomplished film with a finely honed screenplay, featuring remarkable performances from Paula Beer and Pierre Niney

Upperdog no underdog at Amandas

European Distributors: Up Next! - Slovakia

Festival regulars Ozon and Tavernier to vie for Golden Bear

François Ozon’s Ricky and Bertrand Tavernier’s In the Electric Mist join Rachid Bouchareb’s London River (see news) on the list of French productions selected in competition at the 59th Berlinale... 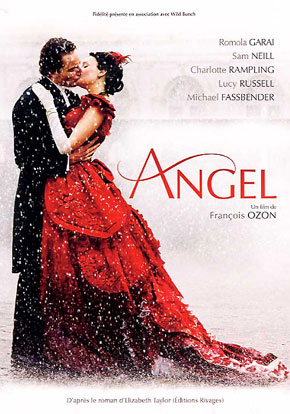