When presenting the film, its two lead actors Patrick Chesnay and Michaël Youn described it, respectively, as an "atypical project" and "a UFO among current French films". It was easy to sense the restlessness about how such a film would be received on the Croisette but, in the end, there was no room for disappointment. As Merle – also present at the screening – emphasised, Héros remains a "naïve” film and takes on all its qualities and faults in a rather uncommonly unpretentious way.

The film, written by the director and Emmanuelle Destremau (with Youn also credited for the dialogue), centres on Pierre, a TV warm-up comedian who kidnaps his favourite singer, Clovis Costa. After initial, frenetically edited shots of Pierre at work, the following scene immediately tosses us into Pierre's apartment, where Costa is being held hostage.

The motivations behind the kidnapping are still unknown and Mele seems not to worry about quick, straightforward explanations. Instead, he prefers to mix genres and uses that mix as a humorous journey of exploration, both as a director and as a creator of characters. Huis clos, crime film, psycho-drama, musical – Héros belongs to all and to none of these territories at the same time.

"I wanted the characters' emotions and their intimacy to always be the priority," said Merle. Youn – who is in practically in every shot – portrays his character with ambiguous tones: a pathetic criminal, an ungifted kidnapper, a romantic hero performing Cyrano de Bergerac, Pierre remains a fragile, tragicomic man that no one can figure out or, ultimately, embrace.

Opposite him, Chesnay’s performance is more passive – literally, as his character spends most of the film stuck to a chair and swathed in tape – but there is a ten-minute single take during which the two men open up to one another, effectively showing that the two comedians share the same level of talent.

This character-driven approach is pushed to a level where Pierre openly discusses the story’s development with Merle (off-camera). Sarcastically, they minimize some of the plot's "déjà-vu" options with the fact that Merle isn't actually Scorsese. Yes, we remember Merle's words before the screening (this is a "naïve” film) but this self-awareness coupled with the fact that the film never takes itself seriously is a good starting point from which to evolve.

Produced by Cyriac Auriol for Les Films du Requin, Héros was backed by Arte France Cinéma and co-produced by Artistic Images, Canal + and CinéCinéma. The film will be released in France on June 20 by Rezo while international sales are being handled by Coach 14.

Benoît Magimel and Laura Smet star in a film centering around "the scam of the century". A Les Films Manuel Munz production

What Makes You Happy and London to Brighton open in France

Arte France Cinéma to the power of 10

The 60th Cannes Film Festival (May 16-27) has got off to an excellent start for Arte France Cinéma, who so far has 10 co-productions selected in the event’s various sections. Heading the list are...

Four majority French productions feature on the programme of the 46th International Critics’ Week (SIC), which takes place May 17-25 alongside the 60th Cannes Film Festival. The four titles...

With eight films from Latin America and Spain in a programme of 17, a distinctly Hispanic feel dominates the 46th International Critics’ Week (SIC), which takes place from May 17-25 alongside the...

While awaiting the April 26 press conference, at which will be unveiled the full programme of the 46th International Critics’ Week (SIC) of the 60th Cannes Film Festival (May 17-25), the team of... 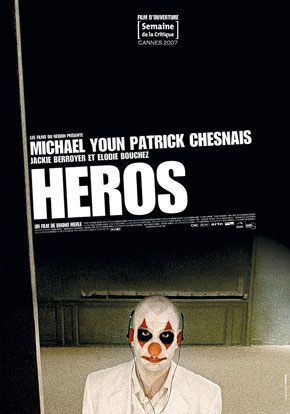