In Just About Love? [+see also:
trailer
film profile], 32 year-old director Lola Doillon (daughter of Jacques) looks at this period of change, in particular the big question of when to do “it” for the first time.

The film provides a humoristic snapshot of a group of 15-16 year-olds and paints a "soft" portrait of a multicultural generation similar to that in films by Cédric Klapisch. Ce Qui Me Meut Motion Picture produced the title.

"Three-quarters of girls will do it and I don’t want to be the last". Goth fan Julie (Christa Theret, who came to attention in Costa Gavras’ The Ax [+see also:
trailer
film profile]), nicknamed Batman at school, and her friend Elodie (Lucie Desclozeaux) both decide to finally bite the bullet and promise each other that they will lose their virginity before the start of the next school year – an aim shared by their closest school friends, Vincent (Gaël Tavares), confidant and secret love of Elodie, and Nicolas (Nicolas Schweri), who has a much less romantic approach to the whole affair.

Scripted by the director, the film recounts the light-hearted gallantries of these teenagers. This phase of growing up, examined closely with a look at romantic feelings (jealousy, the speed of changes, endless discussions commenting on the slightest event in their carefree, teenage lives), which serves as the unifying theme and shows in detail how the youth of today communicate (slang language, ubiquitous mobile phones, Internet chats) make for a feature whose freshness is certainly a major attraction.

Rezo Films is selling the title worldwide and will also be releasing it in France on June 13.

Félix Moati, Laetitia Dosch, Christa Théret, Marina Foïs, Johan Heldenberg and Guillaume Gouix are among the cast of this film being produced by Agat Films and sold by Pyramide

The French sales agent has a plethora of titles on its slate, including the Danish psychological horror film selected in the Panorama and the market premiere of Fanny’s Journey

Having first come to attention with her debut feature, Just About Love? (presented in the Un Certain Regard section at Cannes 2007), Lola Doillon today starts shooting her second film: Contre toi....

LOL all the way to the bank

Lisa Azuelos’ generational comedy LOL is currently enjoying surprise success in French theatres. The film – which attracted 675,000 viewers in its third week on 506 screens – has garnered a total...

Having opened on March 7, the 16th edition of the French Film Festival UK is underway until Thursday in ten UK cities. Supported by Unifrance, Scottish Screen and Europa Cinemas, the event is...

Eight films nominated for the Delluc

Eight features will battle it out for the prestigious Louis-Delluc Award, to be announced on December 12 by a jury of critics presided by Gilles Jacob, presenting the Best French Film of the Year...

Viard and Accorsi get Baby Blues

Saga Blanchard – the producer behind Lola Doillon’s acclaimed Cannes entry Just About Love? (see article) – is currently preparing for this autumn’s shoot of Baby Blues, the third feature by Diane... 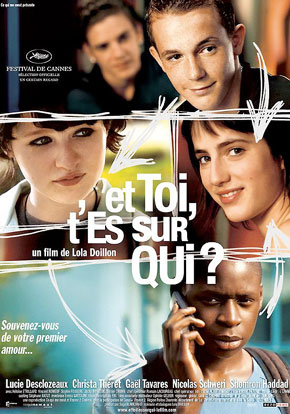