With an official competition entry at the Cannes Film Festival, a 25-minute standing ovation after its public screening, a Jury Prize and sales to a number of overseas territories, Cannes didn’t know quite what hit it when the animated feature film debut Persepolis [+see also:
trailer
interview: Marc-Antoine Robert
interview: Marjane Satrapi, Vincent Pa…
film profile] by Iranian-born comic strip artist Marjane Satrapi and French director Vincent Paronnaud landed on the Croisette in May. Just like the young, Paris-based director’s best-selling graphic novel, the big screen adaptation – made almost entirely in 2D and black-and-white – exhibits an energy sometimes found lacking in traditional features.

In dealing with a chapter in Iranian history – from the downfall of the Shah’s regime in 1978 to the reign of the mullahs in the mid-1990s (and Satrapi’s own detour in Vienna) – Persepolis tackles a range of serious subjects without, however, becoming heavy-handed: the persecution of intellectuals, the Iran-Iraq war, propaganda, indoctrination, censorship, torture, military-police dictatorship, the oppression of women (the wearing of the veil), exile and the issues of identity and integration.

Poetic, moving and sensitive, the film achieves what it set out to do through a pedagogical approach (making the film accessible to young audiences) detailing human and democratic values – including the tragicomic misadventures of Satrapi herself, as a child, then a teenager and a young woman struggling with "existential" problems in an era of historical turmoil.

With its humoristic, inventive dialogue (which does not shy away from using jokes) and sober and elegant images, Persepolis is a universal film as charming as it is difficult to classify, starkly different to its US blockbuster counterparts. Voices were provided by Catherine Deneuve, Danielle Darrieux, Simon Abkarian and Chiara Mastroianni, while Gena Rowlands will voice the English version.

"Never forget who you are and where you come from". A young girl from Tehran, a fan of Bruce Lee, who dreams of reaching the age when she can shave her legs and become a “prophet”, Marjane lives through the Islamic revolution with her progressive parents, her Communist uncle just out of prison and her ferociously independent grandmother (from whom she learns the art of swearing).

When the mullah regime comes to power, the teenager (now veiled) buys Iron Maiden records in secret while the family attempts to lead a parallel life (secret parties with alcohol, contacts with those who forge documents).

However, the Iran-Iraq war intensifies religious control over civilian life and death becomes a genuine threat with bombings. The blunt and dangerous outspokenness of the 13 year-old rebel makes her parents send her to Austria out of fear.

In Vienna, the teenager is confronted with the loneliness of being an immigrant, living in a consumerist society and coping with romantic adventure and disappointment – all treated with humour.

On her return to Iran, the young woman first goes through a period of depression before embarking on a frenetic search for happiness to "forget that we weren’t free". She then gets married before taking off yet again on a search for integrity.

This integrity comes in the form of Marjane Satrapi, a determined woman who did not give into US desires to buy adaptation rights to her graphic novel, preferring instead to follow her own very personal artistic path by co-directing and setting up with Vincent Paronnaud the new production outfit 247 Films to make a low-budget production (€6m) that has proved a resounding success.

All over the world

Respect for an artistic integrity

When Marjane Satrapi and Vincent Paronnaud started out on the adventure of making Persepolis, they were driven by an appetite for risk, for pleasure - and a fierce independence

"The categorical distinction between fiction and documentary is artificial: like the boundary between male and female, there is so much in-between”

"Platforms approach the question of who their target audience is differently"

The head of Special Touch Studios tells us about his three projects presented at Cartoon Movie — from Denis Do, Nadia Nakhlé and Anca Damian — and the sector’s current situation

“I love Marie Curie because she doesn’t compromise” 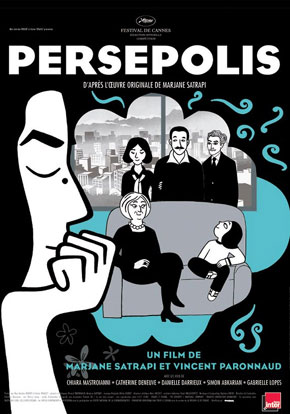