It was love at first sight at the 2007 Berlinale where buyers scrambled to buy it after its triumphant audience screening in the Panorama section. This is where 2 Days in Paris [+see also:
trailer
interview: Christophe Mazodier
interview: Julie Delpy
film profile] began its European tour of releases. Remarkable performances in Germany (€1.15m gross in six weeks), Austria and Switzerland followed. In fact, the adventure is only beginning for director Julie Delpy’s third feature, which has been sold to 84 territories, an impressive record for a small budget film shot in only four weeks and without any television pre-sales. Relying for its success on its anarchic humour – the exact opposite of the current format dominating French comedies – the film marks a success in the completely atypical career of the Paris-born actress-director.

Nominated in 1987 and 1988 for a Best Female Newcomer Cesar for Leos Carax’s Mauvais sang and Bertrand Tavernier’s La Passion Béatrice , Delpy went on to spend most of her film career working alongside US independent filmmakers. Her associations with Richard Linklater and Ethan Hawke brought her international fame with Before Sunrise (1995) and a 2005 Best Screenplay Oscar nomination for Before Sunset. Her past influences can be felt here in what is a highly masterful style behind the apparent chaos in 2 Days in Paris.

"We’re not in Paris, we’re in hell". For Jack (Adam Goldberg), a thirtysomething New Yorker and interior designer, the two-day stay in the French capital and in the former life of his companion Marion (Delpy) turns out to be a true cultural and sentimental living death. Not only does this sensitive hypochondriac under his tattooed macho allure find himself confronted with the isolation of being in a foreign place and surrounded by the unfamiliar (fear of terrorist attacks, lack of cleanliness) and treated as the but of jokes behind his back ("He’s so ugly, all that’s missing is his bite"), his relationship is also going through a bumpy patch. Marion, with whom he has been sharing his life for two years ("almost a feat"), takes advantage of the two days to see her friends, exes included. This makes Jack start dreaming up stories about his partner, driving him to uncontrollable jealous outbursts. The viewer is thrown into the intimate world of a couple, who don’t shy away from rude language in many of the Allenesque type dialogues that punctuate the film.

Besides the excellent acting by its two lead characters, who accurately act on the border of improvisation, 2 Days in Paris does a fine job of combining black humour with trash romanticism through its funny and punchy dialogue. Delpy, who went for a very realistic style – hand-held camera and a quite daring editing style (photos, voice-off) – outlines at high speed a gallery of colourful characters (from racist taxi drivers, men who chat up women, off-the-wall characters to a crazy French family fond of saucy statements, not forgetting the ridiculous members of the Da Vinci Code club). By playing around with parts of the truth and the fantasy of clichés about the French and Americans, the director weaves a cheerful, entertaining story based on a classic war of the sexes, exploring the tension between "two immune systems drawn to one another".

As a reward for the originality of the treatment, the success of 2 Days in Paris cocks a snook at the many investors who shut their doors on the project and marks a masterstroke for its three partners: France’s Polaris Film Production & Finance, fellow Gallic outfit Rezo Films and Germany’s 3L Filmproduktion GmbH.

more about: 2 Days in Paris

A concept film and editorial freedom

Julie Delpy presents a packed story about child custody, cloning and motherhood that looks at the moral and ethical questions arising due to advances in science

Lola+Jeremy: An homage to Michel Gondry

Venice Days rolls out the carpet for Julie Delpy's Lolo 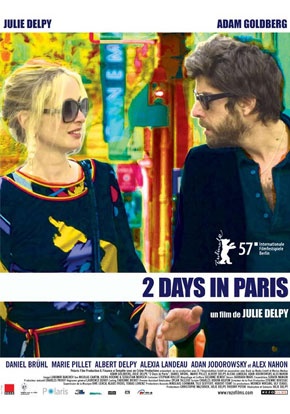