16/07/2007 - Norway’s 2006 Oscar entry, Reprise, has been on the world festivals and critics’ list of top films since its successful launch at the Karlovy Vary Film Festival

The meteoric rise to fame is well-deserved for director Joachim Trier, the wiz kid of Norway’s rich stable of up-and-coming filmmakers, who offers an immensely original, ambitious and entertaining first film where complex content and format are tightly and neatly knitted together.

With his film about friendship, creativity co-written with his close friend Eskil Vogt, Trier has had no problem establishing his own identity and voice, wholly independent from his famous distant cousin Lars von Trier. Reprise [+see also:
trailer
interview: Joachim Trier
interview: Karin Julsrud
film profile] is highly inventive in its concept, yet features a rather conventional storyline: the search for personal recognition, self-fulfilment for the 20+ generation, in particular spoilt middle class youths trying to live up to their dreams of creativity.

The film centres on Erik and Phillip, who are best friends and aspiring novelists. Phillip, the first one to be published, is also the most vulnerable, looking for constant moral support from Erik and drawing his artistic inspiration from his obsessive romantic relationship with Kari. Erik who at the beginning seems the most self-assured and positive figure, gets what he wants: to be published and to meet his hero, fictitious novelist Sven Egil Dahl.

However, as the story progresses, he leaves his earlier unbearable lightness of being for a more grounded understanding of life. At the same time, his quartet of male friends with whom he shares a love for punk music and his emotional immaturity, gradually settle in their private and/or work lives… Or do they?

Just like the figure of speech and enigmatic title of Erik’s novel Prosopopeia which means “to make a person” in Greek, the characters in the film are “in the making”, talented puppets in talented the hands of Trier, who purposely uses a mix of well-edited images – archive footage, photo montage, freeze frames, flashbacks and flash-forwards – to create a playful effect.

The freshness and great sense of freedom in the film also comes from the impressive cast – for the majority non-professionals – in particular medical student Anders Danielsen Lie, who plays Phillip, advertising copywriter Espen Klouman Høiner (who appeared in Petter Næss’s Just Bea) who plays Erik, and Viktoria Winge (aka Kari) one of the only trained acting professionals in the film.

Trier, who juggles with ideas and film language, also makes full use of his eclectic filmic, literary and musical references from Francois Truffaut, Nick Roeg, Heidegger or Nietzsche to bands Joy Division from Manchester and Le Tigre from New York, which further enhances the sense of patchwork and fragmentation in the film.

Light and dark, melancholic and funny, self-centred and universal, the film is all that and more, a normal pick and mix for a first feature skilfully executed by Trier, whose second film will be highly expected.

"Seduced by the playfulness of Reprise"

Karin Julsrud, who spent many years working as independent producer and filmmaker in Norway, joined the dynamic production outfit 4½ Production in 2004 with Reprise under her arm

"A cult movie for the young lost generation"

Norway’s 2006 Oscar entry, Reprise, has been on the world festivals and critics’ list of top films since its successful launch at the Karlovy Vary Film Festival

Upcoming films by Abderrahmane Sissako, Aurélia Georges and Bruno Podalydès will likewise be co-produced by the film subsidiary of the French-German TV channel

"My dream role hasn't been written yet"

BERLIN 2019: Norway's Shooting Star Ine Marie Wilmann talks to us about herself, her work and where her career might lead her to

In addition to Trier, three feature-length documentaries will be receiving the institute’s funding, according to its latest announcement

TORONTO 2017: After winning the Critics’ Prize at the Norwegian International Film Festival, Joachim Trier’s fourth feature, Thelma, is having a Special Presentation at Toronto

Thelma: Love can tear you apart 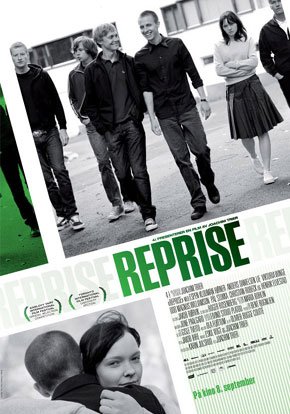