Like that earlier film, La Graine et le mulet (literally “Grain and Mullet”, the two principal ingredients of a fish couscous) explores both the universal search for happiness and tensions and situations very specific to immigrant families, though the director’s new film is not set in a Parisian suburb but in the Mediterranean port city of Sète (near Montpellier).

Habib Boufares plays Slimane, a 61-year-old immigrant shipyard worker who is laid off and then decides to open a couscous restaurant on a boat with the help of his extended family that includes his ex-wife, his children and their partners, his own partner and her adolescent daughter, played by Hafsia Herzi, who steals the show.

Kechiche has lost none of his appetite for the overlapping dialogues and hysterical verbal fights that were also on display in his previous film, though here his approach is more classical in terms of filming and editing (more action-reaction shots rather than swooping cameras) and in storytelling terms, taking this simple premise and stretching it over a novelistic 2.5 hours, with two meals taking up more than half of the film’s running time.

Explained the director: “Generally, an ongoing action doesn’t allow you to stay on one thing for too long, but a real family meal or the beginning of an emotion showing through on someone’s face needs screen time to happen”.

The €6.1m film was produced by Claude Berri for Pathé Renn, with Pathé also on board for domestic distribution (date as yet to be fixed) and international sales. The film was co-produced by Hirsch and France 2 Cinéma and backed by Canal + and Ciné Cinéma.

more about: The Secret of the Grain

CANNES 2019: Actress Hafsia Herzi tells us about You Deserve a Lover, her very moving feature debut as director, in which she also stars

Review: You Deserve a Lover

CANNES 2019: Hafsia Herzi proves to be just as good at directing as she is at acting with her sexy debut feature

Mektoub, My Love: Canto Uno, dreaming on your own

VENICE 2017: Abdellatif Kechiche’s long-awaited follow-up to Palme d’Or winner Blue Is the Warmest Colour simmers for over three hours in competition at the Venice Film Festival

Xavier Legrand is a potential surprise entry, with both Benoît Jacquot and Xavier Beauvois well-placed, while Finkiel and Guédiguian lie in ambush along with the mysterious Kechiche 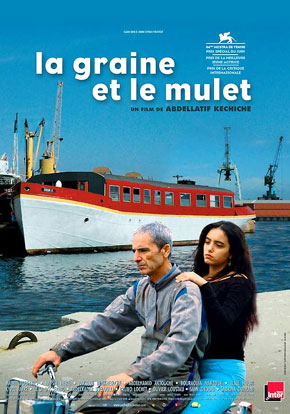