My Brother Is an Only Child

06/09/2007 - A family tale set against the backdrop of political tension: dramatic art, the Italian way

Two teenagers roll about boisterously on the ground in a ball, a struggle in the form of an embrace similar to that of young wild cats. We are in Latina, about 50 kilometres south of Rome. The time is the 1960s, at the heart of an Italy of lower classes and at the approach of a period of ideological turbulence, which would leave the south in fire and blood a decade later.

It is this era of confusion and rifts, which Daniele Luchetti (discovered at Cannes 1991 with The Yes Man) takes a sideways glance at through the story of two brothers: Accio or "Nasty" (Elio Germano), who discovers the political works of the neo-fascists, and his older brother Manrico (Riccardo Scamarcio), who becomes a member of the radical extreme left. These antagonistic stances, which fail to break the fraternal link, offer the director a seductive novelistic unifying theme that focuses on the individual aspect of a historically turbulent period.

Starring a remarkable Elio Germano, who won a David 2007 for Best Actor and discovered at Cannes this year, where the film was screened in the Un Certain Regard, this idealist agitated character symbolises all the distractions of a youth in search of its identity.

Sent home from the seminary in despair by his parents who don’t know what to do with the rebellious hellion, brute and bragger, Accio comes of age (by way of a superb temporal ellipsis) by enrolling himself in the local extreme right movement played by a Luca Zingaretti more Mussolini-like than usual. But with burned out cars with rotten eggs thrown on them, his political education gives him little satisfaction, aside from provoking his own family where his brother Manrico, leader of the striking workers at the factory and a hedonist seducer, attracts all the attention.

Deep down, the most anarchist of the two brothers is not the one we believe. And when the time comes to choose between life and ideology, family and doctrine, Accio no longer obeys his first commitments, going through failure to rallying his former enemies, then abandoning the group by remaining faithful to his native town, while Manrico plunges into a life of secrecy and violence in the north of the country.

A cocktail of sentimental intrigue (with Diane Fleri as a the two brothers’ muse), a family tale and a historical synopsis, Luchetti succeeds in skilfully blending drama and lightness. The director does not shy away from using comedy in a world, which could be full of tragedy, thereby giving My Brother Is an Only Child an irresistible charm without relinquishing the perilous drifts and ridiculous misguidance of ideological fervour, whether it is black or red.

With a fragmented narration and a hectic rhythm (until exaggeration, at least in the last part), the film is one of the best in the Italian film tradition associating humanism and passion, individual destiny and billows of collective funds. The film features a new generation of promising actors and was made by ambitious producers (Cattleya), who managed to find French partners (Babe Films, Studio Canal and France 2 Cinéma) to complete a project with the potential to attract a wide audience.

more about: My Brother Is an Only Child

"History seen from the bottom up"

Riccardo Tozzi - who with Giovanni Stabilini and Marco Chimenz heads one of Italy's most dynamic and active independent production companies, Cattleya - is once again heading to France ...

My Brother Is an Only Child

A family tale set against the backdrop of political tension: dramatic art, the Italian way

In this "opera buffa" by Daniele Luchetti, Marco Giallini plays a ruthless and charismatic businessman who is ordered to do community service

Standing out among the cast of Renaud Fély and Arnaud Louvet’s film are brothers Jérémie and Yannick Renier, Elio Germano, Alba Rohrwacher, and Olivier Gourmet

Luchetti and take-one for Call Me Francesco, a film about Pope Bergoglio

Produced by Pietro Valsecchi for Taodue in collaboration with Eat movie, the biopic about the Argentine pope will be filmed between Buenos Aires, Italy and Germany, in Spanish

Those Happy Years, between art and passion

Set in the summer of 1974, Those Happy Years by Daniele Luchetti tells the story, between real life and fiction, of the director’s family 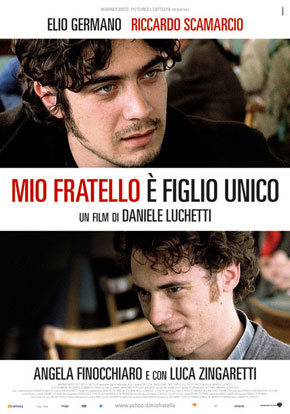