"I work in the morning, I go for a walk in the afternoon and in the evening, I shoot up." With All Is Forgiven [+see also:
trailer
interview: David Thion
interview: Mia Hansen-Löve
film profile], her debut feature presented highly acclaimed by the international press at the Cannes 2007 Directors’ Fortnight, young French-Danish director Mia Hansen-Love (27) has masterfully tackled the difficult topic of drug addiction and its impact on the life of a young thirtysomething couple (an Austrian woman and her French partner) and their six year-old daughter.

Constructed on a very solid script written by the director and on a sober and effective directing style, the film perfectly depicts the complexities of addiction (in a quasi-documentary style) and the contradictory feelings of its two main characters, authentically portrayed by Marie-Christine Friedrich and Paul Blain.

Comprising three parts (“Vienna 1995”, “Return to Paris” and “Pamela, 11 years later”), All is Forgiven revolves around Victor, an eternal adolescent who dreams of being an artist, writes poems and seeks to escape reality through drugs and shooting up, which he keeps secret from his wife Annette and their daughter, Pamela. Although very much in love, the beautiful Annette is not fooled by the disappearances of her laconic spouse, who wanders around bored in Vienna where the couple lives. Well brought-up and a good father, Victor puts up an acceptable appearance for his wife’s family, while Annette hopes that things will get better when the couple return to Paris.

However, when Victor meets up with numerous junkie “friends” in the French capital, the rift between the couple only deepens. He becomes even more addicted and tortured by the feeling of being a loser, Annette finds it increasingly difficult to turn a blind eye to the behaviour of the man she loves and despairs about and their daughter Pamela is caught in the middle.

When he leaves their home, Victor starts a vegetative life with a new, junkie partner. Annette disappears altogether leaving the country with their child, who has to wait 11 years before seeing her estranged and suicidal father again.

With various qualities (a sense of rhythm and space, its portrait of supporting characters, in particular, children), the debut feature by the former Cahiers du cinéma journalist, All is Forgiven, which was developed by Humbert Balsan and produced after his death by Les Films Pelléas, reveals a director to watch closely.

more about: All Is Forgiven

Cineuropa met up with the producer of the film and, most probably, of the director’s next work

"The vulnerability of a human life"

From journalistic beginnings at the "Cahiers du Cinéma" to an acclaimed feature debut at the Cannes Film Festival, young French-Danish director has swiftly climbed the ladder of film fame

CANNES 2022: An expert in observing and distilling the micro-emotions which form the fabric of our lives, Mia Hansen-Løve paints a wonderful portrait of a woman facing a crossroads in her life

Mia Hansen-Løve talks to Cineuropa about Maya, shot primarily in India, unveiled at Toronto and soon to be released in French cinemas 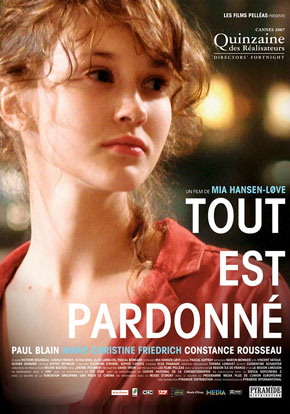