07/11/2007 - With his fourth feature film in nearly a decade, Roy Andersson offers a musical meditation on the human kind played with a lighter tone than in his previous work

This year’s Swedish entry at the Oscars nominations, You, the Living (Du levande) [+see also:
trailer
interview: Pernilla Sandström
interview: Roy Andersson
film profile] has been opening and closing international film festivals since its world premiere in Cannes’ Un Certain Regard sidebar last May, and some 30 distributors have acquired it from The Coproduction Office. The film is currently playing in Sweden, Norway and Finland and will soon open in France.

Several years in the making, each of Roy Andersson’s film creation is like a collectable item for those who cherish his absurd vision of contemporary life and unique work, meticulously crafted from start to finish in his own production house Studio 24 in Stockholm.

Like the 2000 award-winning Songs from the Second Floor, Andersson uses a series of "tableaux" (50 in total) shot in a single take and painted with his distinctive monochromatic colour scheme in the greys and greens. In what the director calls his "mosaic of human destinies", the tragicomic characters, look like Becket’s helpless souls, living in an absurd and unsympathetic world. They speak, often to the viewer, rarely with each other. Or if they do, they remain misunderstood, pitiful in all their vulnerability. "No one understands me", shouts a drunken woman, in a bar full of silent witnesses. A nursery teacher cries her eyes out in front of her pupils because her husband called her 'a hag'. A young girl shouts her love for a rock musician in a bare landscape.

But unlike Songs which had a political message and a general sense of gloom, You, the Living is lighter, playing louder on the burlesque with music and songs sprinkled about here and there. The first scene of an old man dragging a lifeless dog across the screen is one those oddball scenes, as well as the one of a man moaning about his financial difficulties while his wife, wearing nothing but his military helmet, is making love to him. Blurring reality with dreams, Andersson gives free reign to his imagination, relentlessly surprising the viewer, sometimes with highly poetic and brilliant sequences such as the one where the young girl in her bridal dress sits in her kitchen with her adored rock musician playing a solo. Suddenly the room starts to move, like a wagon on rails. It then stops in front of a crowd cheering at the newly weds and continues on its journey of happiness.

Andersson’s deep empathy is felt throughout. He wants the viewer to feel with him for the lot of human kind and to remember that "Man is man’s delight", like the saying of Iceland’s poetic Edda which inspired him.

more about: You, the Living

"Roy’s films fall out of the system"

Pernilla Sandström has been working exclusively for the last ten years with Roy Andersson Filmproduktion. She tells Cineuropa about the difficulties of putting together the financing for his films

"A film about the vulnerability of human beings"

Roy Andersson, one of Sweden’s greatest artists, spoke to Cineuropa in-between his numerous festival appearances, just after the Swedish opening of his film late September

With his fourth feature film in nearly a decade, Roy Andersson offers a musical meditation on the human kind played with a lighter tone than in his previous work

“The preciousness and beauty of our existence,” as seen by Roy Andersson

After his “Living Trilogy”, the award-winning Swedish director has been inspired by One Thousand and One Nights for About Endlessness, which will be ready in 2019

Sweden sends Andersson to the Oscars for the fourth time

Also nominated for the EFA’s People’s Choice Award, A Pigeon Sat on a Branch Reflecting on Existence is Sweden’s candidate for Best Foreign-language Film

“Films that are universal and timeless”

VENICE 2014: Cineuropa sat down with Swedish director Roy Andersson to talk about his sources of inspiration and how he funded his latest film, A Pigeon Sat on a Branch Reflecting on Existence

Life in a Fishbowl wins at Lübeck

A Pigeon Sat on a Branch Reflecting on Existence: The painter's camera

VENICE 2014, Golden Lion for best film. Surreal, absurd, funny and existential, the latest artistic offering by Roy Andersson has made its debut in the Official Competition at the Venice Festival

Andersson’s first in seven years selected for competition at Venice 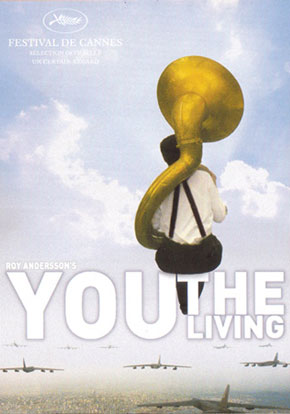