Exportable Irish cinema has traditionally been concerned with the ‘troubles’ in the region and understandably so given the preponderance of the conflict in daily lives and minds and its undeniable cinematic value. However, a brave new breed of Irish cinema has finally risen above the usual worthy political navel-gazing and is concentrating on telling universal, human stories. Lenny Abrahamson’s Garage [+see also:
trailer
interview: Ed Guiney
interview: Jean-François Deveau
interview: Lenny Abrahamson
film profile] is in the vanguard of this movement.

The film’s protagonist is the likeable but simple-minded Josie who is the attendant at a run-down petrol station – the eponymous garage – in a small town in western Ireland. Josie leads a dull life, his undemanding duties at the garage enlivened only by trips to the local grocery store and an occasional visit to the pub. Josie clearly enjoys his beer, but the yokels down the pub mercilessly treat him as the village idiot. Despite knowing that as the town innocent his intelligence and social standing is less than robust, Josie dares to dream about Carmel, the woman who runs the grocery store. However, these dreams are soon shattered. The only other bright spark comes from a friend who drives a trans-European truck and slips him a porn video sometimes. Josie’s placid life is changed forever when the 15-year-old David arrives to assist him at the garage. The pair slowly builds a beer-fuelled bond, but all good things must come to an end, as the third act denouement reveals.

Director Lenny Abrahamson has crafted a lean, spare exploration of social mores in rural Ireland. He observes rather than indicts, “keeping to the surface of things, examining without emphasis” to quote Barthes. Abrahamson and his cinematographer Peter Robertson look at the quotidian rhythms of Josie’s life in minute detail. The film plays out in its short 85-minute length more as movements of music rather than the usual conflict/resolution associated with film. In keeping with the gentle observational nature of the film, dialogue is kept to a minimum and what there is, is functional. The music is restricted to a single theme that is used effectively at a quietly dramatic moment in the film. In its exploration of loneliness and small-town anomie, Garage is similar to Thomas McCarthy’s The Station Agent, but the film is more of a piece with Robbe-Grillet’s literary masterwork Jealousy in its relentless surveillance of Josie’s world.

Garage is also a triumph of casting. Well-known Irish comedian Pat Shortt inhabits the role of Josie and imbues him with a warm geniality that stops well short of sentimentality. He also brings an understated physicality to the role that enhances the part considerably.

Garage was selected for the prestigious Director’s Fortnight at Cannes and also picked up the CICAE Art and Essai award. In addition, the film has won a slew of other awards including the Prize of the Ecumenical Jury – Special Mention at the Bratislava International Film Festival, the Coup de Cour at the Dinard British Film Festival and the Prize of the City of Torino at the Torino International Festival of Young Cinema. Therefore, audience expectations are bound to be sky high ahead of its January 9 France release and its March 14 UK release. And, after Adam And Paul and Garage, writer Mark O’Halloran and director Abrahamson’s next venture will be anticipated with keen interest.

“This is why we make films”

Ed Guiney is on a roll. The veteran Irish producer is not resting on his laurels, basking in the global acclaim accorded to Garage

Filming the difficulty of communicating

VENICE 2019: Peter Mackie Burns chatted to Cineuropa about his Orizzonti film Rialto, which has nothing to do with the bridge in Venice

“The Irish film industry has come of age”

Ireland’s Alan Maher (Marcie Films) produced Song of Granite and his next, Trade, will shoot this autumn

Loro and The Little Strangers have been added to the firm’s Cannes line-up, as has Dany Boon’s La Ch'tite famille

Guiding Lights shines on in 2013 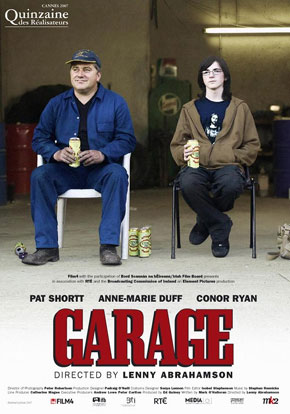