Young student Martin (played by Elijah Wood) arrives in Oxford, full of illusions, with the intention of meeting and working with the admired Arthur Seldom (John Hurt), an eminent mathematician. In order to do this, he lodges in the house of Miss Eagleton, an old personal friend of the professor. Soon after however, as the young student is preparing to leave the city after his first disastrous and disappointing encounter with Seldom, the old woman is found dead, a victim of strangulation.

This is the first in a series of murders that seem to have a common link: a serial killer who leaves clues and difficult symbols to decipher. Faced with such a situation, in which they themselves become suspects, student and teacher in the end have to combine their strengths and different expertise in order to solve the mystery, competing at the same time for the attentions of a pretty nurse (Leonor Watling).

Tornasol Films S.A., the production company headed by Gerardo Herrero, have piloted the ambitious €8m project that brings together various European talents: from Spain, France and the UK. The resulting film is intelligent, opulent and entertaining.

The Oxford Murders is a genre film by Álex de la Iglesia, the acclaimed and popular director whose previous films include The Day of the Beast, Common Wealth, Dying of Laughter, 800 Bullets and Ferpect Crime. The Basque director wrote the screen adaptation with his usual co-scriptwriter, Jorge Guerricaechevarría, and added his own stamp to this thriller involving murders full of intrigues, logarhythms and enigmas that unfold before the eyes of the disturbed characters and equally bewildered viewers.

In terms of the storyline, the film also marks a new direction in the filmmaker’s career: this is a radically different film by a director normally associated with black comedy, bringing to the screen a novel that explores profound notions such as destiny, chance, the feeling of guilt, the meaning of life and the fratricidal conflict that all too often takes root in our hearts and minds.

Demonstrating narrative maturity and a mastery of the camera, the director has rejected the muted atmosphere of this type of film by including a great deal of dialogue. De la Iglesia’s production is worthy of any Hollywood film and boasts an impressive cast: British actor Hurt brings psychological depth to the character of Professor Seldom with his imposing presence; his tortuous past can be read in every wrinkle of his face hardened by his inner struggles, and he conveys great emotion with his magnificent voice; Spanish actress Watling adds an emotional, carnal and earthly element to this triangular and cerebral intrigue that is a touch morbid and self-destructive.

more about: The Oxford Murders

Tornasol Films, founded in 1987, has produced films by distinguished international directors. They are now hoping for box-office success with this big-budget European co-production

"One shouldn’t be a slave to oneself"

A second English-language feature for the successful and popular Spanish director, a film marked by the hints of irony that are part of his particular style

Eugenio Mira’s third film unfolds like a stifling, agile and theatrical game, an exercise in style that looks for tension and spectacle without worrying about its credibility.

The Bilbao-born director has just started shooting his eleventh feature, a black comedy to star Hugo Silva, Mario Casas, Carmen Maura, and Carolina Bang, among others

On Friday, July 1, the Council of Ministers approved the extension to the 18% tax deductions for film production, which were due to expire on December 31 of this year. This show of confidence...

“We’ve left the advertising cake in the hands of foreign groups which own private television companies in Spain”. Director Fernando Trueba opened up the Pandora’s box at the presentation of the...

Alex de la Iglesia orchestrates a grotesque and excessive spectacle in order to depict, with his usual dark humour, a stormy love triangle, a political metaphor for late Francoism

The ICAA has announced the recipients of a substantial part of the 2010 film subsidies, €54.8m out of a total of €83.85m. Funding has thus been announced for the amortisation of features (for... 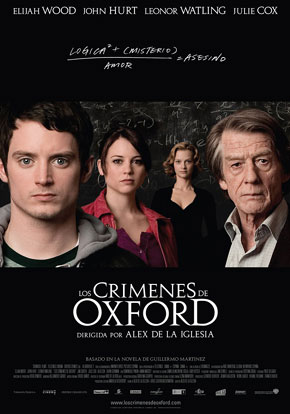